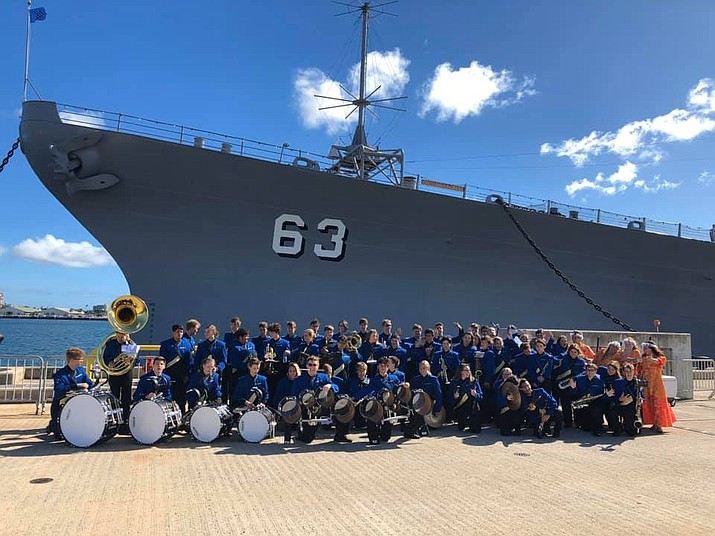 The Prescott High School Pride of Prescott Marching Band and Orchestra is on a week-long field trip to Pearl Harbor, serving as Arizona musical ambassadors for events leading up to the 78th annual National Pearl Harbor Remembrance Day.

As part of their week-long festivities, the 69 band and orchestra members performed with the Marine Corp Band on the deck of the USS Missouri in Pearl Harbor. From there, the students took a tour of Oahu, visited the Dole Plantation and even got in some beach time.

On Dec. 7, the band will march in the National Pearl Harbor Remembrance Day parade down Waikiki Boulevard and then will visit the USS Arizona memorial where the students will place a wreath and have the opportunity to visit the wall honoring the 1,177 servicemen who died and are entombed on the battleship that lies just below the surface of the memorial. Oil still seeps from the ship to the water surface; some refer to the spillage as “black tears.”

This is the second time in seven years the Pride of Prescott has been invited to these ceremonies.

The Daily Courier will do a finale story with the band upon their return to school next week.

Video of the PHS Band in Pearl Harbor

The 'Pride of Prescott' PHS Band and... - Prescott Unified School District No. 1 by pusd1

The 'Pride of Prescott' PHS Band and... - Prescott Unified School District No. 1 by pusd1

Below are the direct links to these videos on Facebook