The Lab at Prescott High to be focus of customized course 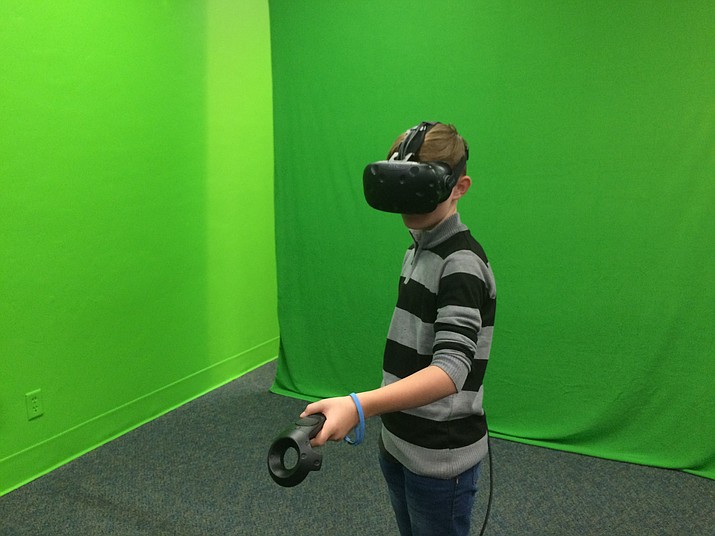 A student tries out The Lab’s virtual reality equipment in the green screen area. (Nanci Hutson/Courier)

Prescott High Principal Mark Goligoski and The Lab founder and media technology teacher Robyn Bryce speak approval from Governing Board on Dec. 3 for new course to coincide with The Lab technology provided through a more than $43,000 donations from the Jewish Community Foundation.

The Lab at Prescott High School is proving the catalyst to a new brand of “cutting edge” learning fueled by emerging, high-caliber technology suited to careers yet to be imagined.

In existence for a month, The Lab has so inspired students, faculty, parents and community leaders the high school and district administration took an unusual leap — they enabled the media technology faculty visionary behind this venture, Robyn Bryce, to craft a course rooted in this unique space.

On Tuesday night, the Governing Board voted 4-0, with member John Mackin absent, to approve the new course, officially titled Advanced Modern Manufacturing and Automation (AMMA). The course will be incorporated into class offerings for the semester following Christmas break. Some 20 to 25 students will be able to enroll in the elective class that will instruct them in the proper use of the computer software, robotic and high-skill machinery and its relationship to various career industries.

Typically, the Governing Board approves all course offerings in the spring prior to the new school year.

“The curriculum is structured around career and technical education standards and learning goals that reflect automation studies, design and advanced manufacturing content, along with employability skills,” the course synopsis Bryce read aloud.

“This has been a quick journey,” a sometimes teary-eyed Bryce said of the curriculum she developed to coincide with The Lab that celebrated its grand opening on Nov. 13. “It’s amazing.”

Unveiled at a public ceremony attended by more than 100 business, civic and education supporters, Bryce shared how a summer workshop with students at the University of Nebraska inspired her to figure out a way to bring a creative media laboratory to Prescott High and its students. In a collaborative venture, the district aligned with the Jewish Community Foundation that financed the project in an unused workshop space behind the school cafeteria. The foundation donation: $43,420.31.

Asked at the opening about how The Lab was to be used, Bryce said she hoped her colleagues would be able to utilize equipment to enhance their lessons as well as offer students after-school experiences and club opportunities to create and market products for the school community. She cited a desire to create some new career technical education courses, but suggested it might take a year or two for those to get a nod.

Instead, Bryce was given the administrative go-ahead to transform her vision into a class, one she predicts is just the beginning of the exciting endeavors The Lab will be able to offer the student body.

Board President Tina Seeley asked a couple questions about the costs associated with this new venture.

Though this class will be initially offered at no cost, Bryce and fellow administrators said future students will be asked to pay similar fees – about $30 per student a semester – for other STEAM (Science, Technology, Engineering, Art and Mathematics) and career courses. Bryce, too, said students will be gaining some entrepreneurial skills, with the equipment capable of making and marketing products to sell - T-shirts, banners, magnets, even Badger brand “bobble head” dolls - for PHS students, faculty and alumni. All proceeds from student-made products, either in the class or through an after-school club, will be reinvested into the educational venture, she noted.

Bryce was clear the high school has no interest in serving as a competitor to local businesses. Rather she said her hopes is to prepare students to intern, and eventually work, for some of those local enterprises.

As this course will be incorporated into the high school’s career technical education program, Bryce and administrators said some of the state CTE grants may also be able to be utilized for The Lab.

“I am ecstatic,” Resnick said. “This is exactly what we wanted to happen. We wanted them to think big.”

District Superintendent Joe Howard admitted he did not expect this process to go so fast. But he’s glad it is.

“I’m super excited,” said Howard as he commended Bryce and PHS Principal Mark Goligoski for their full-speed ahead approach to utilizing this engaging resource to benefit the entire school community. “That’s what happens in a community when we all work together. We want this to be a catalyst.”

And Howard has no doubts this will be a high demand class. All Bryce’ media classes have waiting lists.