Editorial: Day that lives in infamy has lessons for US 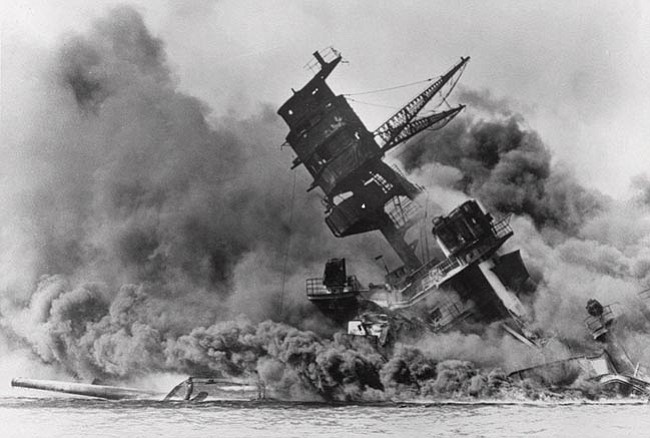 The Associated Press/file The battleship USS Arizona belches smoke as it topples over into the sea during a Japanese surprise attack on Pearl Harbor, Hawaii, on Dec. 7, 1941. The ship sank with more than 80 percent of its 1,500-man crew, including Rear Admiral Isaac C. Kidd.

It has been 78 years since the United States was pulled into a war many Americans did not want. On Dec. 7, 1941, the Japanese attacked the U.S. Navy’s fleet at Pearl Harbor in the territory of Hawaii.

President Franklin D. Roosevelt, one day later, calling it “a day that will live in infamy,” declared war on Japan. Four days later, we also were at war with Germany and Italy.

We had no choice. World War II had arrived on our doorstep, a nation that had felt insulated from foreign wars.

The 2,403 Americans who were killed at Pearl Harbor (including eight Arizonans who were on the USS Arizona) didn’t stand much of a chance. There had been no declaration of war before the attack, although, in hindsight, there were ignored warning signs. When the first of the 353 Japanese planes attacked at 7:48 a.m. Hawaiian Time that Sunday morning, the U.S. ships were sitting ducks.

All eight Navy battleships were damaged. Four of them were sunk. It was a sign of the American resilience – which the Japanese underestimated – that six of the eight were returned to service as the U.S. gradually won back the Pacific.

Eleven years ago, Prescott News Network’s Chino Valley Review profiled resident Les Auge, who survived that fatal day. He was a gunner mechanic in the Army and was stationed at Camp Malakale, Hawaii, about three miles from Pearl Harbor with the 251st coast Artillery Anti-air craft regiment when the bombing occurred.

“We were coming back from breakfast, and I saw two Japanese planes flying over our camp strafing (shooting from the guns on their planes),” Les recalled for the 2008 story. “It all happened so fast, you didn’t have time to think about it, you just did what you had to do.”

We couldn’t find Les this year for an update; he would be 101 years old now. Les was honorably discharged from the Navy in 1944, and moved to Chino Valley in 1982.

He was an active member of the Prescott branch of the Pearl Harbor Survivors Club. “Our motto is ‘Lest We Forget.’ Our club marches in parades, and does speaking engagements around the area,” Les said.

Les was one of very few Pearl Harbor veterans from this area. Let us remember all of the many young American soldiers who lost their lives that December day in 1941.

It is also crucial that we remember that Sunday morning in December, to be diligent about the possibility of horrors such as Pearl Harbor. These atrocities cannot be forgotten.

Americans stare down fear, as we did in 1941. We aren’t prone to cowering, afraid of our shadows. Remembering Pearl Harbor isn’t just about recalling a tragedy, it is also about recognizing what happened over the following years, when we rose to lead the world back into the light.