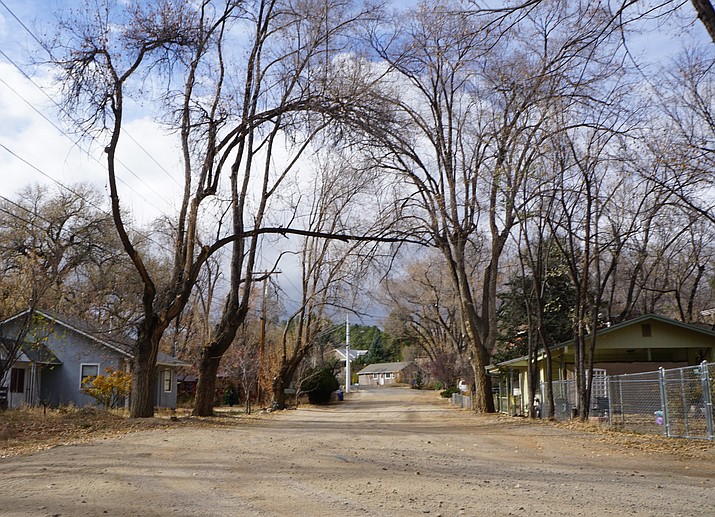 Hope Street, a dirt street located just off White Spar Road in southwest Prescott, is in line for a major road-improvement project in the coming months. Neighbors have voiced worries that the project would change the rural character of the street. (Cindy Barks/Courier) 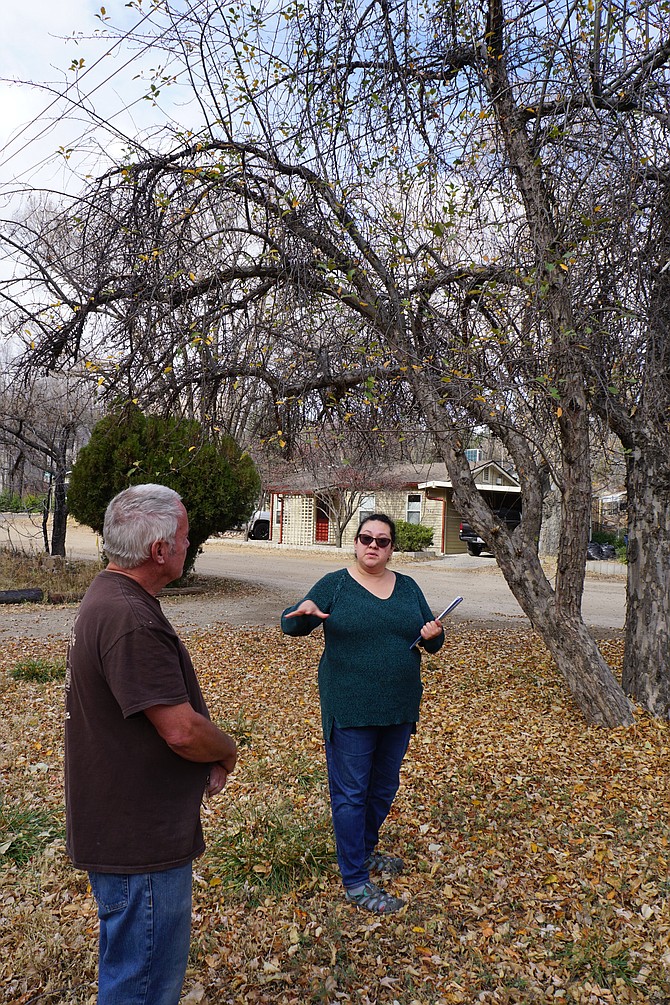 Neighboring property owners Sara Gonzalez and Kevin Greif discuss the century-old apple tree that serves as the center of the Hope Street neighborhood. Residents have voiced concerns that the apple tree would be lost in an upcoming street project, but city officials say the tree will be saved. (Cindy Barks/Courier)

With its dirt surface and its neighborhood apple tree, Hope Street in the southwestern corner of town retains an aura of old-time Prescott.

“It really is a neighborhood where you can stop by and talk in the front yard,” said resident Sara Gonzalez, who has lived in the area for about a year. “We did buy this because it’s rural.”

City officials, on the other hand, say they have taken the neighbors’ concerns into account and have made numerous changes to accommodate the shifting resident wishes.

“We’re at the point where it’s no-win,” Prescott Public Works Director Craig Dotseth said recently, noting that the city began looking into the Hope Street situation in about 2015 after getting a flooding complaint from a resident.

In a recent action, the Prescott City Council approved a $776,259 contract with Asphalt Paving & Supply for pavement of Hope and Warne Streets, replacement of the water system and the addition of new curbs, valley gutters and drainage improvements.

A number of residents spoke at the meeting, expressing their worries about the fate of Hope Street. The council ultimately decided to move ahead, voicing worries that the city could face legal liabilities for possible flooding in the future.

Gonzalez and nearby property owner Kevin Greif recently walked the neighborhood, pointing out construction challenges, along with the street’s singular rural feel.

Central to that ambiance is a century-old apple tree that is said to date back to the White Spar Road area’s Brookside Orchard from the early 1900s.

“Many people in the neighborhood harvest apples from this tree, which still produces hundreds of pounds of fruit,” Gonzalez said.

Research has shown that a late-1800s ranch along Granite Creek was known as Brookside Ranch in the area that is now known as Hope Street, Gonzalez said.

In the early 1900s, the land was cleared, planted with fruit trees and renamed the Brookside Orchard. The property changed hands several times through the decades before being re-dubbed the Haymore Dairy in the 1930s.

“This apple tree may be an original fruit tree from the historic Brookside Orchard and has thrived to this day,” Gonzalez said.

Although the neighbors worry that the apple tree will be lost to the construction project, Dotseth said the city plans to instruct the contractor to save the tree.

In fact, the characteristics that residents love about Hope Street — its dirt surface, its rural nature, and its proximity to Granite Creek — have combined to create a dilemma for the city’s Public Works Department.

Dotseth said the original design was for a wider street with curb, gutter and sidewalk, as well as a complete underground drainage system.

But in December 2017, the City Council approved a plan by Public Works to “right-size” many of the street projects that were in the works. The plan was an effort to get more projects done with the money available by removing some of the landscaping and underground drainage components from future projects.

Dotseth said that move toward right-sizing coincided with the neighborhood’s concerns about changing the character of the area with a dramatically wider street. The road width was reduced to about 20 feet wide (from a standard city width of 25 feet).

Gonzalez says the neighborhood wants a quality project, but one that is not overly intrusive.

“Really, the concern is that the city doesn’t have a set plan,” she said. “They modify it and change it as they go.”

Dotseth and Construction Services Manager Tim Sherwood say, however, that the plans have evolved largely at the neighborhood’s requests.

While the notice to proceed for the project was scheduled for this week, Sherwood said the bulk of the construction likely will not get started until the first week of 2020. The project is scheduled to be complete by April 2020.