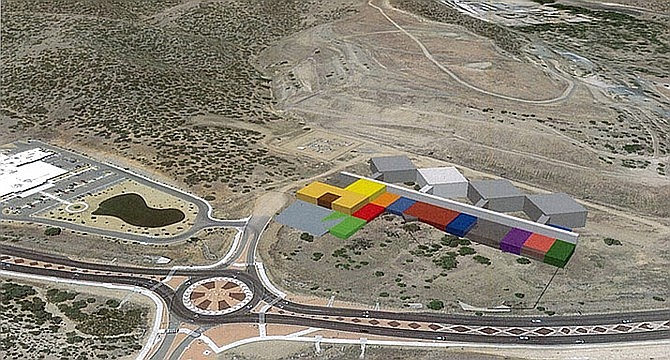 This image shows the proposed design of the Yavapai County Criminal Justice Center on its chosen site south of Prescott Lakes Parkway. The white building indicates the first of four pods to be built. (Yavapai County/Courtesy)

A final decision is not expected until about March 2020, but the Yavapai County Board of Supervisors took several more steps this week toward a $70-million-or-so bond issue to pay for a new jail in Prescott.

After first discussing the matter in closed-door executive session, the supervisors unanimously agreed on Wednesday, Dec. 4, that the money the county is spending for the project in the interim would ultimately be reimbursed by a bond issue that is “not to exceed $75 million.”

County Administrator Phil Bourdon explained that the county has spent about a half-million dollars so far in the preparatory and planning work that is going into the expected bond issue.

“We’ve been incurring some expenses,” he said, noting that the county had already brought on an underwriting firm to handle the necessary process for the bond issue.

With the supervisors’ vote this week, the proceeds from the bond issue would cover those costs, as well as future “advanced construction-related expenses” for the jail project.

Although the exact total needed for the bond issue is yet to be determined, Bourdon said the county does not expect to borrow more than $70 million for the jail project. The $75 million reference in Wednesday’s motion was included to provide a cushion, he said.

For months, the Board of Supervisors has been approving measures that are setting the stage for construction of a 144-bed jail off Prescott Lakes Parkway, near the county’s Juvenile Detention Center.

The process began this past summer, when the board approved a property tax increase with the intention of annually putting about $4 million of the additional revenue toward the cost of a new jail in Prescott.

Then on Nov. 6, the supervisors heard a report from Stifel Public Finance consultants about the process that is necessary in the months leading up to a bond issue to finance the jail project.

The board later approved the engagement of Stifel during its Nov. 20 voting session.

This week, along with the approval of the reimbursement of early jail-related expenses, the supervisors agreed to retain attorney Timothy Pickrell of Squire Patton Boggs as the bond counsel for the county jail district’s contemplated bond issue.

In addition, the board approved a $547,195 agreement with Kimley-Horn and Associates, Inc., for civil/survey consultant services for the jail, as well as a request for a new fund set up for accounting form construction activities for the new jail — both of which were approved in the board’s consent agenda, a list of mostly routine items approved in a single vote.

Bourdon stressed that none of the board’s actions so far have obligated the county to the bond issue. That decision will likely occur in about March with a resolution authorizing the bond issue, he said.

Still, he agreed that all of the steps are working toward the bond issue, for which the supervisors have consistently voiced support.

Yet to come is a decision on the choice of an architect. Bourdon said that action likely would be on the supervisors’ Dec. 18 meeting agenda.

The county also will soon be going out for proposals for a contractor through the construction-manager-at-risk process.

If the supervisors ultimately decide to go ahead with the bond issue, the county expects to pay back the borrowed money through a combination of property-tax revenue, jail sales tax revenue, and general fund revenue.

If all goes as planned, initial site work on the new jail project could be underway at the Prescott Lakes Parkway site by about July 2020.