Birding: Desert birding with water birds in the background 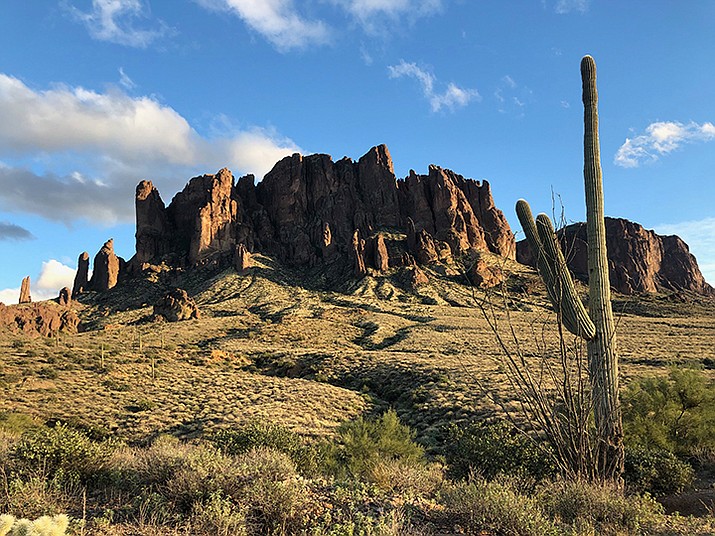 We spent Thanksgiving weekend down in Mesa, which afforded me the opportunity to do a little desert birding. On the way down — and on the way back — we stopped in Black Canyon City and hiked the Black Canyon National Recreation Trail. The trailhead is on the west side of I-17, just off of exit 242.

I love the habitat in this area — it is classic upland Sonoran Desert, with giant saguaros, ironwood and palo verde trees, and jojoba bushes. In my mind, it is absolutely beautiful. It reminds me of the desert habitat at the base of the Santa Catalina Mountains in Tucson, where I grew up.

We first hiked the trail on Wednesday, which was prior to the large winter storm that hit Arizona on Friday. We hiked from the trailhead down to the Agua Fria River. On Wednesday, the river could best be described as a gentle stream, capable of being crossed relatively easily.

On our way back to Prescott three days later, we hiked down to the river again. That was the day after the storm. The river was probably five or six times wider, and there were rapids!

While down in the valley, I was able to spend some time in Gilbert at the Riparian Preserve at Water Ranch.  This facility is probably one of my favorite places to go bird watching in an urban environment. This 110-acre facility is such a dichotomy for ‘desert’ birding. There are seven ponds of varying depths, hosting an incredible diversity of water birds — from tiny least sandpipers to giant American white pelicans.

The juxtaposition of water birds and desert birds side-by-side is quite striking. While bird watching from the trails, I saw an abundance of common desert birds such as Gila woodpecker, Abert’s towhee, curve-billed thrasher and northern cardinal. In the ponds, however, there were geese, ducks, dowitchers, stilts, avocets, sandpipers, herons and egrets. In a natural environment, it would be rare to see such different bird species so near to one another.

Although I was only there for about an hour and a half, I racked up a good bird list for the day, including rosy-faced lovebirds, peregrine falcon and an uncommon common gallinule. I even caught a brief glimpse of a least bittern as it flew from one clump of vegetation to another, never to be seen again! This is a very secretive bird that is fairly common in this habitat, but is rarely seen.

On Friday morning, we were awakened at 5:15 a.m. by an emergency alert (think how loud amber alerts are on your phone) broadcasting a tornado warning for the area! Fortunately, we were safe, but we did receive a lot of rain that morning.

Later in the day, as the storm cleared out, we headed out to the Lost Dutchman State Park located in Apache Junction. The park is nestled against the northwestern slope of the Superstition Mountains. It was very windy, bitter cold and muddy — but hey, we were out in nature!

On Saturday, as we drove home from Mesa to Prescott, we experienced a big change in conditions.  When we left Mesa, it was pleasant and mild.  When we arrived in Prescott it was 29 degrees and everything was covered with a heavy layer of snow.  It was a lovely homecoming!

Eric Moore is the owner of Jay’s Bird Barn, with two locations in northern Arizona — Prescott and Flagstaff.  Eric has been an avid birder for over 50 years. If you have questions about wild birds that you would like discussed in future articles, email him at eric@jaysbirdbarn.com.