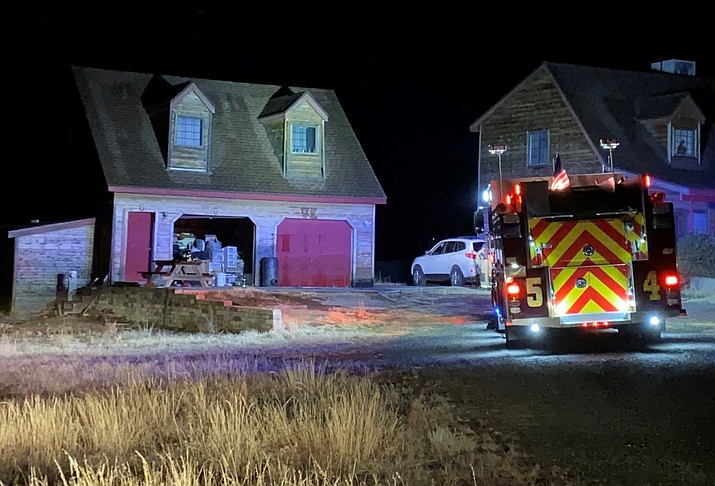 A Central Arizona Fire and Medical Authority fire engine responds to a home in Dewey where a fire was started due to a propane heater Monday, Dec. 2, 2019. (CAFMA/Courtesy)

Firefighters were fortunately able to extinguish a Dewey home fire before anyone was injured or irreparable damage was done to the building Monday night, Dec. 2.

Central Arizona Fire and Medical Authority (CAFMA) crews responded to the home in the 14000 block of E. Bradshaw Road at about 11:30 p.m., according to a CAFMA news release.

They found smoke coming from the upstairs window of an apartment. Standing at an adjacent window was a man needing help getting out of the building.

A crew quickly entered the building, rescued the man and extinguished the fire, the release states.

The man, who was in his 60s, reportedly had a medical emergency and knocked over a tank-top propane heater he was using to heat a room with onto the apartment’s wood floor, the release states.

The upstairs residence quickly filled with smoke, but the man was still able to call 911.

“We want to remind everyone that propane heaters such as the one in this residence last night are not intended for use in enclosed buildings,” CAFMA Fire Marshall Rick Chase said. “Carbon monoxide poisoning is a great risk to occupants of the building as well as the potential to start a fire.”

That said, there are propane heaters that are suitable for indoor use, so it’s important to check a heater’s properties before turning it on in an enclosed space.