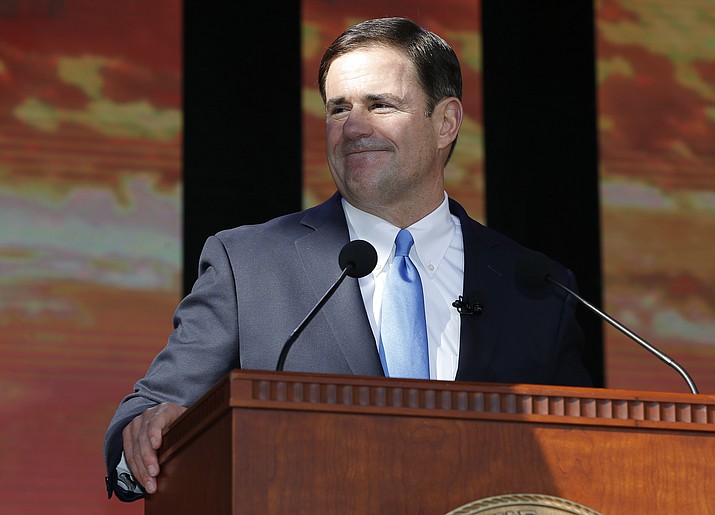 The governor said it makes sense to provide incentives to inmates to stay out of trouble, not get involved with gangs and pursue education while behind bars. That incentive involves accumulating credits to, as Ducey put it, “buy down your time.’’

Ducey’s comments come a day after a special House panel approved a series of recommendations to change state laws to translate their good behavior into reduced sentences.

Most significant, it would allow those who qualify to shave three days off their sentences for every five days they serve. In essence, it would permit release after someone serves 60 percent of their sentence.

The current “truth-in-sentencing’’ laws, approved in 1993, require virtually all inmates to serve at least 85 percent of their sentences — meaning one day credit for every six served.

Only those serving time for Class 4, 5 or 6 felonies would be eligible. These are considered lower-level felonies, with 2 1/2 year presumptive prison terms for first-time offenders.

Other recommendations include additional funding, both public and private, for programs aimed at helping inmates after they are released, increasing the availability of drug and education programs and adding staff for GED programs.

“Everyone knows that I’ve had a lot of passion around reducing recidivism,’’ Ducey said. “The idea that you’re providing incentives while in prison for proper behavior, non-violence, no gang affiliation, getting your GED or industry certificate, and for that to be a way that you can, in a sense, buy down your time, is something I’m open-minded to.’’

But not necessarily for everyone.

“Of course, we’d want to start with non-violent individuals and with a sense for the victim first,’’ the governor explained.

“But I think we can do a better job at that,’’ he continued. “And I think it’s a place where I think the public sees the benefit as well.’’

This isn’t the first foray by lawmakers -- or by Ducey -- into the idea of providing incentives for inmates and, at the same time, trying to reduce prison population.

Last year the governor signed legislation which allowed inmates convicted solely of drug offenses to be eligible for release after serving 70 percent of their sentences. To qualify, they had to complete a drug-treatment program or other “self-improvement program.’’

Prison officials estimated at that time that about 7,000 of the more than 40,000 people serving time fit the criteria of the legislation, meaning they could be released once they reach that 70 percent threshold and complete the required programs.

The recommendations of what is formally known as the Ad Hoc Committee of Earned Release Credits for Prisoners actually make no changes.

That is now up to the full Legislature. And despite approval of the changes last year for drug offenders, that could prove a hard sell.

Rep. John Allen, R-Scottsdale, who chairs the House Judiciary Committee, refused to give a hearing last session to similar legislation sponsored by Rep. Walt Blackman, R-Snowflake. Blackman also is the chairman of the special committee.

Allen told Capitol Media Services he has not had a chance to review what the panel is proposing.

“If this cuts down on recidivism rate, great,’’ he said. “And if they can draw a correlation between less recidivism and these activities, I’m all for it.’’

But Allen said he wants to be sure this doesn’t become a “catch and release program,’’ if for no other reason than that will actually increase the number of people in state prisons. He said once people are sentenced for the second or third time they will end up with even longer sentences.

The bottom line, Allen said, is he wants some proof that these programs actually change behavior, not just behind bars but after people are released.

“If this doesn’t help the merits of behavior, I’m not going to support it,’’ he said.

What Allen said he does support, regardless of questions of early release, is more to deter future criminal activity.

“We do need more intervention early on and we need more training and stuff before release,’’ he said.

In fact, Allen said this doesn’t even need to occur within the context of prisons. He particularly cited programs in Pima County which has pretrial diversion programs, essentially allowing people to escape even being sent to prison if they complete certain treatment or education requirements.

Ducey said he, too, wants to be convinced that any new programs make sense.

“My first thought is always with the victims of these crimes,’’ Ducey said. “But I do want to find a way, a pathway after people have served their time and paid their debt, that they can have a second chance.’’