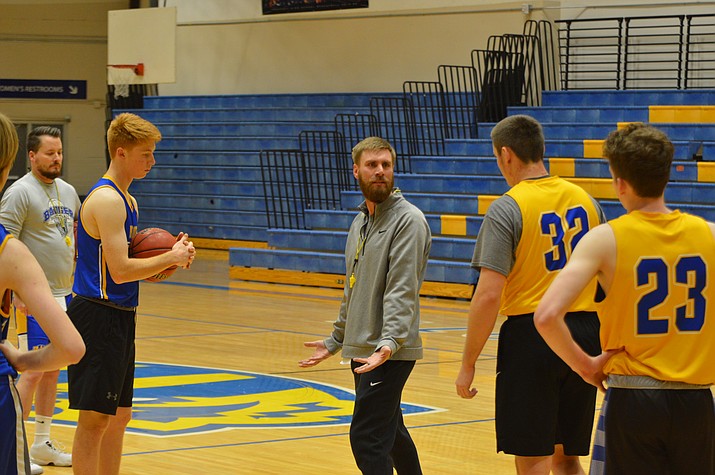 PRESCOTT — Second-year Prescott boys basketball coach Travis Stedman isn’t shy about speaking his mind, especially when it comes to his expectations of the Badgers this season.

“I believe in my whole heart we are the most talented team in our region,” Stedman said confidently, almost as if he knew what was going to transpire over the next three months.

Prescott finished sixth overall in a Grand Canyon region a season ago that sent three teams to the 4A state play-in round.

Unfortunately, Lee Williams, Mingus and cross-town rival Bradshaw Mountain didn’t make the cut, leaving what is likely a collective sour taste in the mouths of all seven region coaches, their players and fans.

Now in year two, Stedman, who took over for longtime coach Adam Neely in 2018-19, said things have gotten a little easier, but there are welcome expectations with eight returning players on the roster.

“I think with those expectations, games start getting played out on paper and in minds rather than on the court, but if we can keep our drive, our health and our straight-up desire, we’ll be in pretty good shape as we head into region,” Stedman said.

Seniors Korey Schwartz and Dellin Boyd lead a crop of eight players that won just six games a season ago, but none of that matters now, they say.

“We have to keep playing together. We had a hard time staying together last year. I think we have the capability of going a lot farther than a region title this year,” Boyd said of the Badgers, which were 6-16 (3-9 Grand Canyon) last year.

Stedman likes what he’s seen so far from his senior point guard, who a month ago was playing football for the Badgers under center at quarterback.

“He’s our quarterback, too,” Stedman said about Boyd. “He’s a natural leader and kids listen to him. … I would be blown away if he is not the defensive player of the year this year.”

Schwartz, who nearly averaged a double-double in 2018-19 with 13.1 points and 9.6 rebounds per game, said offensively, the club needs to keep “moving the ball around” to get better shots and score more points, but to win, Prescott needs to focus on defense.

“I think it starts on the defensive end, getting stops as much as possible, forcing bad shots and forcing turnovers,” Schwartz said.

At 6-foot-6, 230 pounds, Schwartz may at first appear to be slow afoot, but that isn’t the case, Stedman said.

“You look at that kid on paper and you’re like, ‘post player, slow, no movement.’ But he may be one of our top three athletes on the team. He’s got great footwork, amazing hands and no question our best passer. And he’s an unreal defender,” Stedman said.

Other returners include sophomore Jason Parent, who averaged 11.7 points and five rebounds per game in 20 appearances as a freshman a season ago.

Prescott (0-0, 0-0 Grand Canyon) opens the season tonight against Arcadia in Phoenix. Tipoff is scheduled for 7 p.m.

The Badgers host Deer Valley in their home opener Friday, Dec. 6, at 7 p.m.