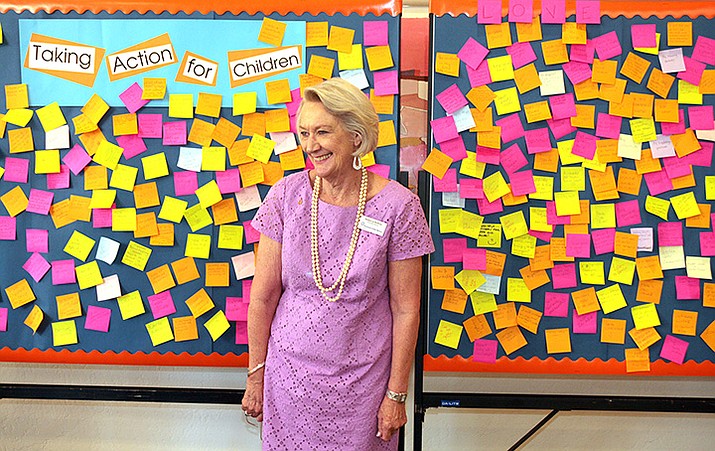 One might suggest Rebecca Ruffner’s affinity for fighting for the underdog, particularly young children, stems from what she calls her “advocacy genes” inherited from a family invested in community life.

Ruffner’s mother, Elisabeth, who died in March, just six months shy of her 100th birthday, was long considered the grand dame of Prescott. She played an integral role in historic preservation, the arts and, generally, leaving a legacy of good for generations to come.

Even before she became a mother and grandmother to her two now adult children and two granddaughters — Garrett Tyler, Chelly Herren and daughters, Everly, 5, and Merritt, 18 months — Becky Ruffner’s passion was ensuring young children get the very best start in life.

As a student at Prescott College where she earned her bachelor’s degree in psychology and anthropology, Ruffner found she was fascinated by learning about brain development in young children and how they learn so that they can then grow up into “human beings.” She later earned a master’s degree in clinical child development and family systems at Pacific Oaks in Pasadena, California.

She yearned to know how to enable children to become adults able to thrive in the world.

With that passion, Ruffner became a founder in 1972 of the Primavera School.

For the decade she worked at the school, Ruffner came to see the importance of nurturing families on whether a child is able to navigate his or her early years.

“It just became so clear to me,” she said.

She was inspired to become an advocate for programs suited to enabling young children to get a good start in life.

That desire manifested itself in her educational pursuits even as she started talking to other local, state and national childhood experts on efforts that could make a real difference. She decided what she really wanted to do was launch a child abuse prevention council.

Those efforts morphed into starting a Child Safe program and work with Yavapai Regional Medical Center to start a Family Resource Center.

Yet Ruffner still wanted to do more — and so three decades ago she founded Prevent Child Abuse Arizona, a nonprofit organization aimed at training parents, educators, law enforcement officials and child welfare professionals on how to treat children so they become well-adjusted, and happy, adults.

Ruffner’s top pride and joys (although she admits choosing a handful is as impossible as picking a favorite child):

Healthy Families, a two-decade old program piloted at YRMC that serves 4,000 of the highest-risk families across the state with evidence-based approaches to prevent child abuse;

Best for Babies; a statewide initiative to reduce trauma and improve outcomes for infants and toddlers placed in out-of-home care.

Since starting with just a banker’s box and floppy disk computer in her home, Ruffner has created an agency revered for its impact on all aspects of child care, be it informing parents how to properly comfort a fussy and crying baby to organizing an annual child abuse prevention conference for up to 600 professionals from around the state.

“Our roots are in Yavapai County, but our reach is statewide,” said Ruffner who will retire from her venture as founder and executive director of Prevent Child Abuse Arizona at the end of December.

The 72-year-old grandmother who like her mother is also active in civic life — she is president of the Central Arizona Land Trust Board — said she now wants more time to “go on hikes” and be with her grandchildren.

Ruffner and her youngest granddaughter, Merritt, 18 months. She is the second child of her daughter Chelly Herron.

“Becky has transformed the field of child abuse prevention in Arizona, inspiring other leaders to change systems to better serve children and families,” said Claire Louge, the organization training director who was just promoted to take over Becky’s executive director role upon her retirement. “She leads with vision, warmth, grit, authenticity and an unshakable dedication to purpose.”

Ruffner has won numerous awards and accolades over the years. In September, Ruffner was honored with the national Prevent Child Abuse Americas’ James Hmurovich Award.

“Becky Ruffner is the rare visionary who can both perceive big-picture needs and implement detailed solutions,” reads the nomination letter from CJ James, Ruffner’s executive assistant. “Just as importantly, she is a galvanizing leader who inspires positive action in service of children and families.”

“Our community, and the entire state, and even beyond, could not ask for a more dedicated and ardent advocate for children,” said Nicol who became acquainted with Ruffner when she first started the organization. “We’re just so lucky to have her in our community.”

A farewell reception for Rebecca Ruffner, founder and executive director for Prevention Child Abuse Arizona, will be held on Thursday, Dec. 5 from 4 to 6 p.m. at the nonprofit agency’s headquarters at 3298 Bob Drive in Prescott Valley. For more information, call the agency at 928-445-5038.