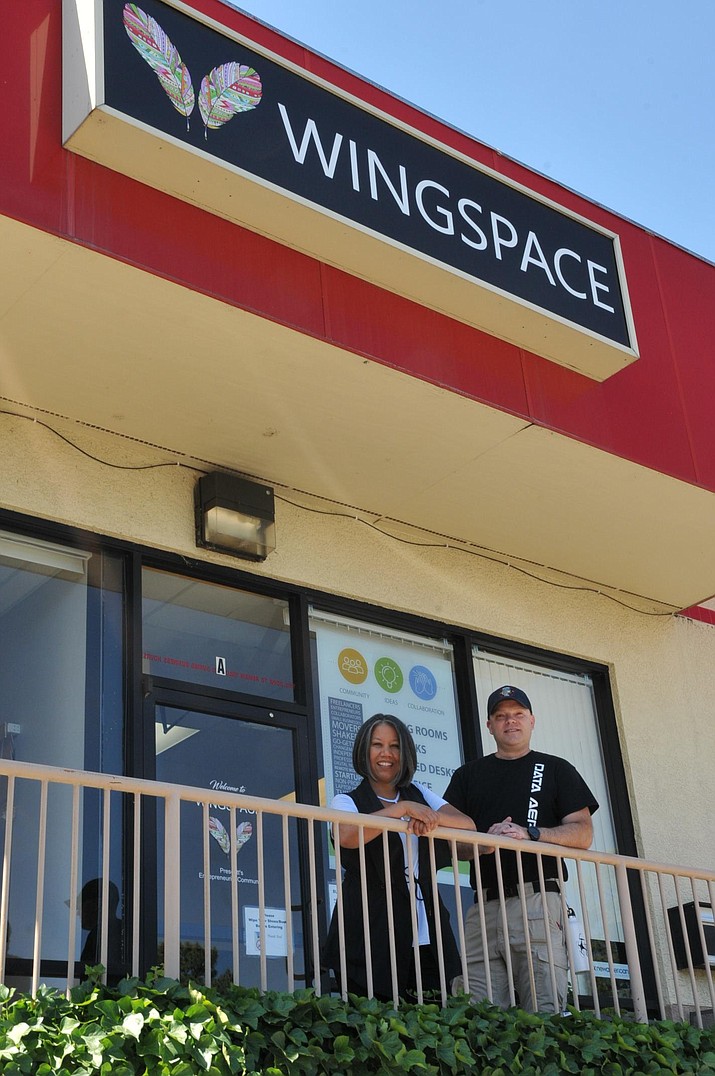 OK, so not everyone is cut out for the 9-to-5, Monday-through-Friday grind. In today’s fast-paced, Internet-driven world, there are other options out there when it comes to finding meaningful, honest work.

And it has turned out well in building community, idea-sharing, networks, collaboration and support among its members in Prescott.

So well, in fact, that WingSpace may eventually accommodate independent workers who live in some other parts of the Quad Cities.

Now, nearly 1-1/2 years after it first opened, WingSpace is considering a new satellite location in Prescott Valley to help the independent workforce there.

“We’re trying to serve the east end [of Prescott] and Prescott Valley,” said Jon Lee, a data analyst and commercial drone pilot for his Prescott-based company Data Aero LLC and a WingSpace member from nearby Walker. “We need to build up the membership first [in order to open a satellite office]. The community drives the effort.”

WingSpace Coworking founder Melanie Banayat said her 50 members use WingSpace’s 4,500-square-foot Prescott location, which, she adds, is “a clear indicator of how the workforce is changing in our rural area.”

This year, the 2019 MBO Partners’ State of Independence in America Report stated that 41 million Americans “work as consultants, freelancers, contractors, temporary or on-call workers,” adding that they generated $1.28 trillion of revenue in the United States in 2018.

The report added that MBO Partners, an independent workforce talent provider for the federal government and more than 39 Fortune 100 companies, expects the freelance worker population to continue growing over the next 10 years.

“It’s not for everybody,” Lee said of coworking. “Some people work well from home. I think best in social situations. I’m always open to critique. We hold each other accountable for our goals.”

“Coworking started booming in 2010 and it didn’t catch on until after the economic downturn,” Banayat said. “People started their own businesses.”

Proximity member management software maintains a worldwide independent employee network for coworking spaces. In the U.S., there are more than 400 such spaces in the network. Five of them are in Arizona, including two in Phoenix and one apiece in Prescott, Flagstaff and Tucson.

“I worked from home, and I knew a lot of other people like myself,” Banayat said of WingSpace’s humble beginnings. “I researched the growth of the independent workforce in multiple states. It will surpass 50% in the next decade in the U.S. Research studies have shown that freelancers, small businesses and remote workers are growing like crazy.”

With the demand for independent contractors rising, so, too, is the need for work spaces with offices, desks, conference rooms and WiFi capability. WingSpace does this, while also providing “a supportive community and educational classes to help these people succeed in their work life and social life,” Banayat says.

In mid-July, WorkSpace began playing host to a series of open-to-the-public gatherings for independent workers in Prescott Valley and on Prescott’s east side.

Lee has been involved in trying to eventually open a Wingspace satellite office in Prescott Valley. Lee and Banayat say the problem for a growing number of employees who work from home is that they start missing the social interaction they once had on the job. Coworker spaces can help compensate for that, they add.

“I’m coming to work again,” Lee said. “It creates a clean division with work and home.”

Social gatherings, educational programs and lunch-and-learns (businesspeople from different disciplines teach each other various aspects of business and personal development), among other activities, benefit members.

“You make friendships in different aspects of work,” Lee said. “Having people and movement around you is good for the soul.”

Lee said the pros for places such as WingSpace include reducing costs for employers and improving quality of life for employees.

“You’re not on the road two hours a day hurting the environment [by driving a gasoline-powered vehicle],” Lee added. “It’s a win-win for companies and employees.”

Private offices feature a locking office desk, a chair, a locking filing cabinet and a professional address, as well as access to an open community space and a shared kitchen.