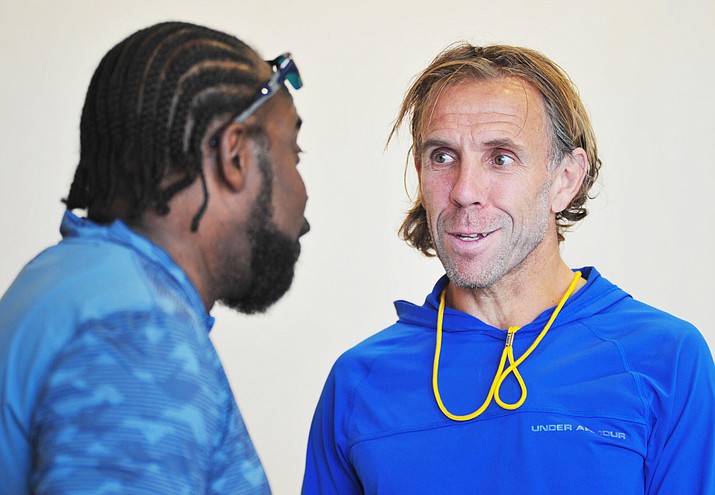 Veteran soccer coach Dan Balaguero returns for his third season on the pitch at Embry-Riddle, but in those three years, he’s developed quite the reputation for being a “players coach.”

“He’s really involved and you can tell he really cares about us and the program,” All-Cal Pac player Jacob Baker said.

Defender Marc Birkvald, another All-Conference select, added, “He’s a players coach. He works hard and takes care of us, and we work hard for him.”

Leading the Eagles to the Cal Pac semifinals two years ago, and the finals a season ago, Balaguero said the club’s early success has been a great achievement.

“When I came here in 2011 with Texas Brownsville, I really liked the area,” Balaguero said when asked what brought him to Embry-Riddle. “I knew a lot about the two campuses [Prescott and Daytona Beach] and that they had great academics and facilities. I thought it would be a cool change to try and win at a place that was different to a state university and had more of a focus on academics.” 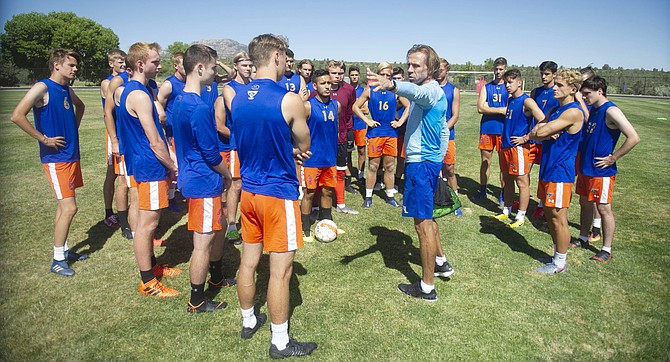 Originally from Nottingham, England, Balaguero has played soccer his entire life, beginning with the Notts County Youth team, which at the time was a championship caliber team in the first division (highest division).

He played with the team until he was 16, and his success earned him a spot on the British Colleges National Team; after a few years with the club, Balaguero moved to the United States to continue his career.

Balaguero began his stateside career playing for Champlain College, a Junior College in Vermont, where he was a two-time All-American and 1996 National Junior College Athletic Association Player of the Year. Balaguero then transferred to play NCAA Division I soccer for West Virginia University.

At WVU, Baguero was honored with an All Big-East Conference selection and made First Team Regional All-American.

After the end of his collegiate career, Balaguero played for the Vermont Voltage in the Premier Development League (since renamed the United Soccer League), a very successful Major League Soccer development league that has produced 70% of draftees for the MLS SuperDraft in the past decade.

After a couple of seasons with the squad, Balaguero hung up the cleats to pursue a career in coaching.

Balaguero began his coaching career in 1999 at his alma mater Champlain College.

During his three year stint as the coach, the team went 27-17-1 with appearances in the NJCAA playoffs each season.

Balaguero then spent three years coaching NAIA Virginia Intermont College where the team went 52-14-2, winning the NAIA Championships in 2003 and again in 2005.

After winning two NAIA titles in three years, Balaguero began his longest coaching stint at the University of Texas-Brownsville, where he coached for nine years. His tenure there was a very impressive one, going 119-30-1 under his leadership, including two seasons where his team had the highest winning percentage in NAIA men’s soccer.

Balaguero’s team won five conference championships and made four NAIA playoffs appearances, including a second place finish in 2014, during his nine years coaching the team. He also was awarded NAIA Southwest Region Coach of the Year in 2014. Coach Balagueoro’s very impressive run as head coach for UT-Brownsville was ended when the university was closed in 2015.

After the closure of the school, Balaguero had coached there for nearly a decade and went from one team to another before ultimately deciding on Embry-Riddle.

He spent one season as an associate coach for Brown University, where the team posted a 10-5-2 record after going 5-6-6 the previous season.

He then coached for a single season at the University of St. Thomas, in which he posted yet another winning record, before finally landing at Embry-Riddle in 2017. 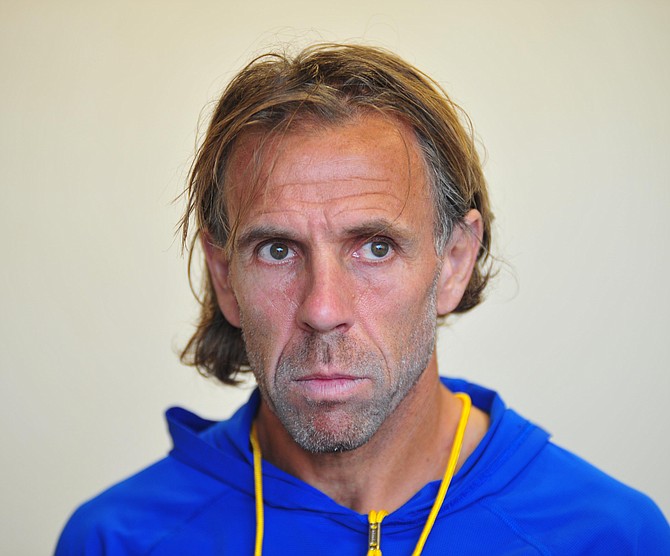 Embry-Riddle soccer head coach Dan Balguero, leading the Eagles to the Cal Pac semifinals two years ago, and the finals a season ago, said the club’s early success has been a great achievement. (Les Stukenberg/Courier)

When asked about their fondest memory playing soccer under Balaguero, both Baker and Birkvald, as well as many other players in the locker room, agreed that it was in the conference semifinals last year, when Jarred Petersen (who is returning to the club as a junior) scored an incredible volley for the game-winning goal against UC-Merced in overtime.

The Eagles have had winning records for both seasons under Balaguero, and alongside a talented squad and assistant coach Phillip Reid, who Blaguero called, “A Prescott Legend,” the eagles look to improve once again, eying a conference championship and an NAIA playoff appearance.

Jake Whitaker is a stringer for The Daily Courier. Follow him on Twitter at @jakewhit8424. To reach him, send an email to sportsdesk@prescottaz.com.