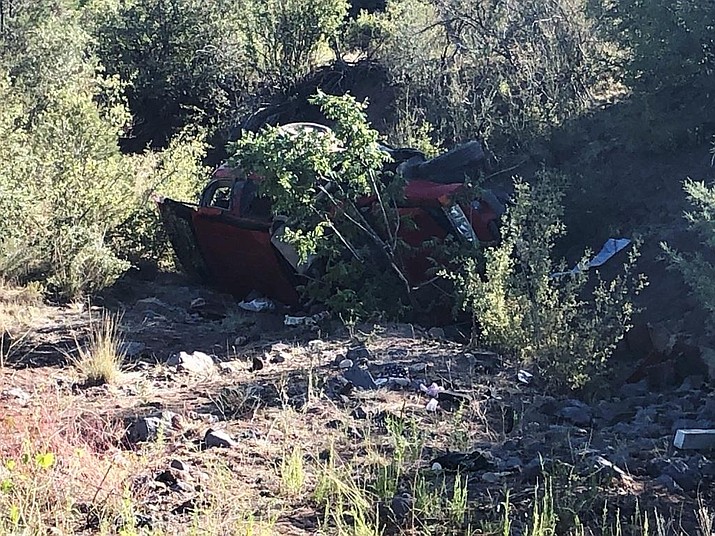 A red Saturn station wagon sits in a ditch near mile marker three off Williamson Valley road outside of Prescott. A rollover collision claimed the life of an 18-year-old driver early Saturday morning, according to a Yavapai County Sheriff’s Office (YCSO) release. (YCSO/Courtesy)

EDITOR'S NOTE: This story has been updated from an earlier version to reflect authorities identifying the driver.

A rollover collision claimed the life of an 18-year-old driver early Saturday morning, according to a Yavapai County Sheriff’s Office (YCSO) release.

The driver was identified by YCSO on Saturday afternoon as 18-year-old Caitlyn Smiddy of Upland, California. Next of kin was notified earlier in the day.

"The Sheriff's Office expresses our condolences to Caitlyn's family and friends," YCSO spokesperson Dwight D'Evelyn said in a statement.

Just after 1:30 a.m., YCSO deputies were dispatched to a rollover collision on Williamson Valley Road outside of Prescott at mile marker three early Saturday morning.

When they arrived on scene, a red Saturn station wagon had come to rest in a ditch. Smiddy was ejected and suffered fatal injuries when the vehicle landed on her, according to D’Evelyn.

A passenger in the vehicle escaped with minor injuries. Authorities have not identified the passenger as of Saturday afternoon.

Following the collision, deputies learned that friends of the occupants aided the passenger to safety, and also attempted to lift the car off the driver, but were unsuccessful.

Before the collision, witnesses indicated the Saturn was driving at high speed and had passed another vehicle before going into a skid. The driver reportedly overcorrected and slid of the roadway into the ditch as the vehicle rolled.

A collision reconstruction team was on site Saturday morning interviewing involved parties, witnesses and gathering evidence as the cause of the rollover collision remains under investigation, according to a YCSO statement.

Watch The Daily Courier and dCourier.com for more information.