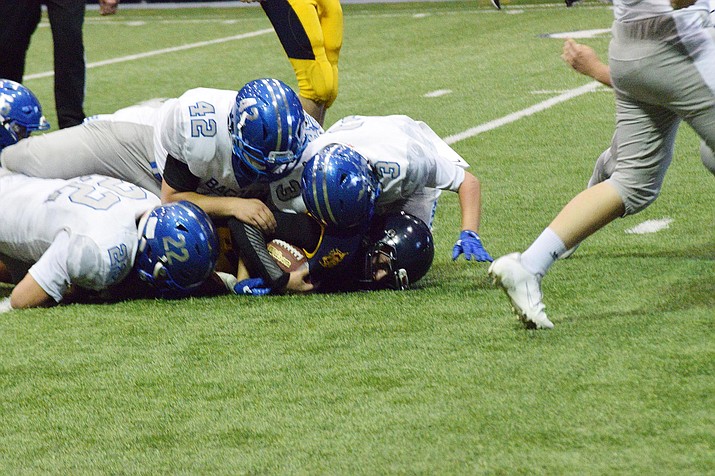 A group of Bagdad defenders jump on top of a Joseph City runner as the Sultans went on to a 54-12 win at the Walkup Skydome on Saturday, Aug. 31, 2019, in Flagstaff. (Sylvia Andrews/Courtesy)

FLAGSTAFF — Elias Jauregui had 181 yards and three touchdowns, Rocky Sandoval threw for a score and the Bagdad football team opened the 2019 season with a 54-12 win over Joseph City on Saturday morning.

The Sultans (1-0, 0-0 West) led 54-0 at halftime inside the Walkup Skydome on the campus of Northern Arizona University in Flagstaff.

“I was really impressed with how our offensive line opened up holes for our running backs,” Bagdad head coach Dalton Mills said.

Bagdad amassed 293 yards on the ground.

Carson Jeans had seven carries for 77 yards and a touchdown, and returned a kickoff 75 yards for another score.

Sandoval completed seven passes for 154 yards and a touchdown.

As for the defense, Bagdad forced Joseph City to turn the ball over five times, while Jauregui and Connor Watson each recorded an interception.

The Panthers scored 30 points in the first quarter and beat Valley Union 62-0 in their season opener Friday night.

Kickoff next week is scheduled for 7 p.m.