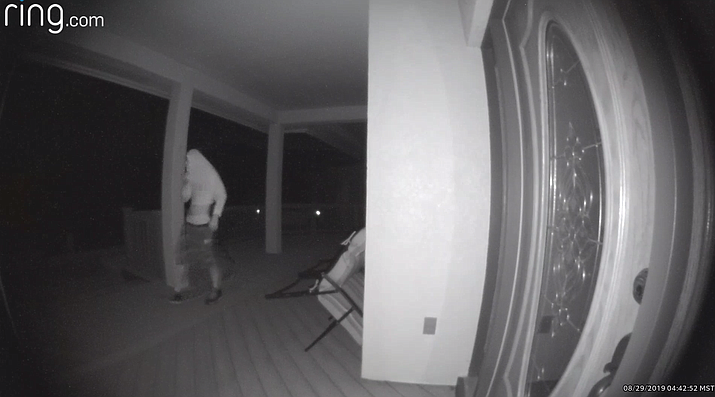 Yavapai County Sheriff’s Office (YCSO) deputies are seeking to identify and locate a suspect who burglarized properties in the Bensch Ranch area off Highway 69 between Mayer and Spring Valley.

At least seven properties were reportedly accessed by the suspect between midnight and 5 a.m. Wednesday, Aug. 28, according to a YCSO news release. One of the victim’s lives in the 15000 block of E. Upper Ridge Lane.

Stolen items include an Amazon tablet from a home, unknown specific items from a vehicle and a 42-inch television from an RV trailer, according to the release.

Deputies were able to obtain security video from one of the residents and are hoping someone will recognize the suspect. He is described as a skinny white male over six feet tall with ‘sleeve’ tattoos on his left arm and a tattoo on his right calf.

The video shows the suspect with a shirt pulled over his face in an attempt to conceal his identity. It also shows him using a flashlight.

The suspect apparently used the back gate of Bensch Ranch and may have had a vehicle waiting for him on Antelope Creek Road, YCSO reported.

Deputies have collected evidence and are continuing their investigation.

Tips may also be submitted online at yavapaisw.com. A tipster who provides information directly to Silent Witness is eligible for a cash reward. Refer to case 19-029927.

Editor's Note: The map below has been corrected since our original post. Information provided by the Yavapai County Sheriff’s Office.