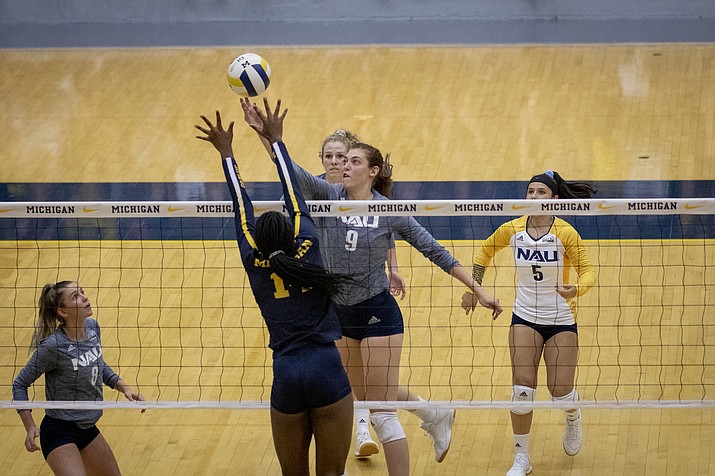 NAU’s Abby Akin goes up for a kill as the Lumberjacks take on No. 15-ranked Michigan on Friday, Aug. 30, 2019, in Ann Arbor, Michigan. (Marc-Grégor Campredon/Courtesy, via NAU Athletics)

“We started off shaky and I was really proud of how we settled in about midway through the first set,” said head coach Ken Murphy. “We got into a rhythm and that carried into the second and third set. After the third set, we didn’t block another ball the rest of the match and Michigan gained some confidence that had an impact on the match.”

Senior Abby Akin and junior Heaven Harris carried the Lumberjacks’ offensively with Akin posting a team-high 12 kills on .455 hitting. Harris totaled 11 kills and hit .500. However, NAU was outhit .247-.224 for the match and Michigan held a significant advantage in kills (63-42).

Still, NAU managed to outblock Michigan by an 11.0-8.0 margin spurred by six blocks from Akin and four more from sophomore Ryann Davis. Freshman Jasmine West led all players in digs for the second consecutive match with 16. Senior Sydney Lema also posted a double-digit dig match with 13.

After the teams split the first two sets, NAU stood one set win away from a nationally-ranked road win for the first time in 30 years following a dominating third set. The Lumberjacks registered six blocks and three aces in that set alone and led wire-to-wire.

NAU raced out to an 8-2 advantage in the third set, on the heels of four blocks, and claimed the 2-1 lead in the match behind a dominant defensive effort. Akin was involved in three of NAU’s six team blocks, while Harris, Davis and Jacobsen all had a hand in forcing Michigan into a negative attack clip (-.172) by posting a pair of stuffs each.

Michigan had just five kills compared to nine attack errors in the third set, but the Wolverines – a Sweet 16 team last fall – regained their groove just in time to deny the Lumberjacks of the upset bid. Michigan hit .429 and .571 in the fourth and fifth sets respectively to bounce back from the 2-1 deficit.

“For long stretches we were in control of the match and the most important thing was what we were doing on our side of the net,” Murphy said. “That gives us belief that if we expand on that, we can finish a match like this.”