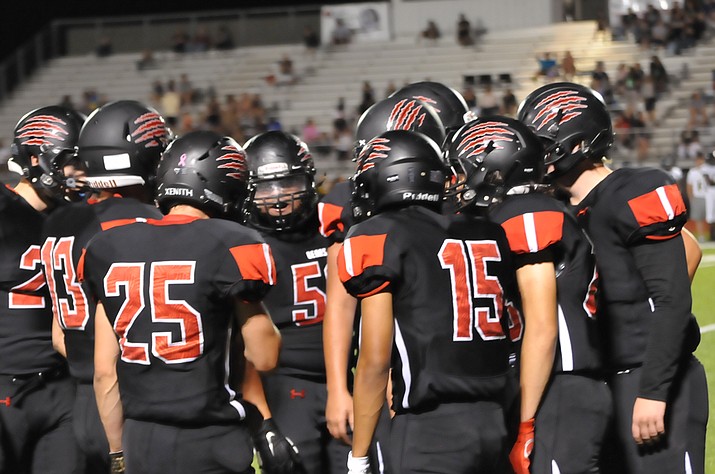 The Bradshaw Mountain offense huddles up before a play against Shadow Mountain on Friday, Aug. 30, 2019, in Prescott Valley. The Bears won 55-21. (Doug Cook/Courier)

PRESCOTT VALLEY — Trying to rebound from a gut-wrenching 33-26 loss to Estrella Foothills in its 2019 season opener Aug. 23, Bradshaw Mountain’s football team seemed ready to put a whooping on somebody this week.

Unfortunately for Shadow Mountain, the Matadors bore the brunt of the Bears’ wrath, suffering a 55-21 blowout loss on Friday, Aug. 30, at Bob Pavlich Field.

The Bears of the 4A Grand Canyon region evened their record at 1-1, while the Matadors of the Skyline region, who were playing their opener, dropped to 0-1.

Bradshaw Mountain cruised to a 42-0 lead at halftime, as quarterback Josh Grant scored two rushing touchdowns of 57 yards and 12 yards in the first quarter and threw TD passes of 36 yards and 11 yards to wideout Alex Cabral to open the second quarter.

Titus King polished off the second period with TD runs of 12 yards and 3 yards to hand the Bears a 42-0 lead with 26 seconds to go until intermission.

“We were really trying to improve, because we have a lot of young guys [including 26 sophomores],” Cabral said. “Week 1, it really showed us we’ve got to focus more on practice, we’ve gotta execute what we’re doing. Focus, focus, focus – that was our main goal this week.”

In the second half, with several Bears backups in the contest, sophomore tailback Elijah Acuna reached pay dirt on fourth-quarter scoring runs of 35 yards and 2 yards to stamp an exclamation point on the convincing win.

“Every game we get experience, this young team is going to get better and better,” Bradshaw Mountain coach Chuck Moller said. “They’re challenging every coaching talent we have. Every day is a clean [dry] erase board, it seems like. But what’s fun is they’re taking coaching, they’re seeing what it’s like.”

In addition to maturing into his role as the starting QB, Grant continued to sparkle on special teams, consistently booting kickoffs into the end zone for touchbacks, converting 7 of 8 extra points and providing solid punting.

Bradshaw Mountain’s swarming defense came to play, too. Jacob Foshee and Noah Shaver each registered a fumble recovery and Cabral had an interception, all in the first half.

“We came together as a unit more than individuals,” Shaver said of the difference in the Bears’ performance from their first game to their second. “This week, we were all hitting our assignments, flowing to the ball better, and we proceeded. Their fast offense got to us, but then we reacted to it and overcame the obstacles.”

With 8 minutes left in regulation, Shaver made a statement tackle on a Shadow Mountain receiver, power-driving him in the air and slamming him hard to the field turf. The hit garnered Shaver a personal-foul penalty as his teammates and the crowd cheered.

“I didn’t have anything against him – it was just like instinct,” Shaver said of his big tackle. “I hit him. He was coming up and in my mind I’m like, ‘I don’t know what’s happening right now. I’m going to play football.’ And that’s what I did. In my mind it was a clean hit – no helmet-to-helmet. I just picked him up and put him down.”

The Bears committed two turnovers in the second half, including an interception and a fumble, but Acuna’s two TD runs and an interception by Grant Sanders neutralized those miscues.

“We played very well,” Cabral said. “We played well because we played as a team. There’s no one guy out here.”