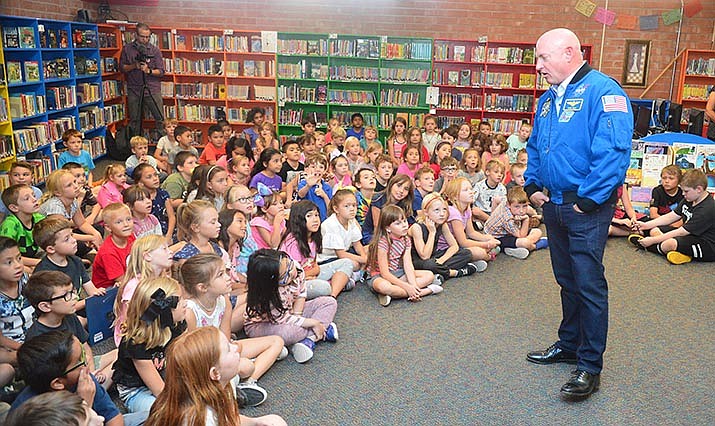 A group of Taylor Hicks Elementary kindergarteners in Prescott were delighted with their surprise visitor on Thursday morning — a man who never landed on the moon but brushed his teeth in space.

“We have a real astronaut in our classroom today,” a boy exclaimed.

“This is the coolest thing in the world — or out of this world,” declared Prescott Unified School District Superintendent Joe Howard, who joined the tour and stayed to hear Kelly read aloud to all second-graders the second of his two-book “Mousetronaut” series, “Mousetronaut Goes to Mars.” “I think it’s super important to our kids to see a living example of research and science.”

Kelly’s presence at the school revolved strictly around his role as an astronaut. His tour, though is part of his political campaign for the 2020 United States Senate seat now held by Republican Martha McSally.

Talking to a group of fourth-graders in the cafeteria, Kelly quizzed students about who among them liked math and science. He was clearly impressed to see most hands up in the air. 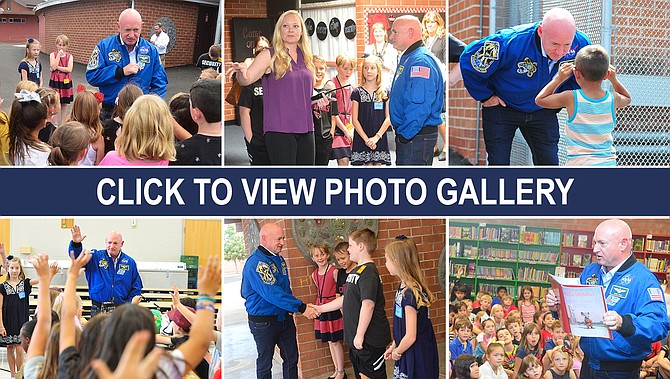 Kelly confessed math wasn’t always his best subject in his elementary years. But he knew he needed to gain an aptitude to fulfill his dreams that started with work as an engineer before he became a U.S. Navy pilot and then astronaut. He encouraged them all to work hard, and seek out help when needed, so they garner the skills they will need to get where they want to be one day.

From the littlest to the biggest kids, the question Kelly fielded most was whether he ever got to walk on the Moon. Kelly confessed that he did not; the last time an astronaut walked on the surface of the Moon was when he was in second grade. He did, however, visit the International Space Station where his twin brother, Scott, lived for a year.

A popular follow-up question for Kelly was whether he ever had a chance to go to Mars. Kelly again had to shake his head.

“Nobody’s been to Mars yet,” he said, noting a landing there might be more feasible for this generation than his own because of evolving space engineering and technology.

One first-grader asked him who he has as a boss: Kelly answered now that he’s retired, it is his wife, former U.S. Rep. Gabby Giffords.

Giffords left her seat in Congress after a 2011 attempted assassination in Tucson that killed six people and left her to recover from a gunshot wound that caused a serious brain injury.

At Taylor Hicks, Kelly’s “cool” was all about his NASA jacket filled with emblems associated with his career as both a naval aviator and astronaut.

He fielded questions about everything from black holes — they can’t be viewed from space but are found at the center of every galaxy — to what it feels like to travel at 17,500 miles per hour.

“It’s really fast,” Kelly said who with a wink admitted it is also “really fun.”

On the issue of gravity/no gravity, Kelly joked that putting on a pair of pants and eating a meal is far more difficult than it is at his home in Tucson.

“Everything is really hard to do in space,” Kelly admitted.

Fourth-grade greeter Jonah Waara said he enjoyed hearing about what it’s like in space; and the sort-of true story that inspired his book of one of the mice that accompanied Kelly on one of his missions.

Kelly’s favorite sight over the course of some 50 days in space?

“Earth — the best planet in the universe.”