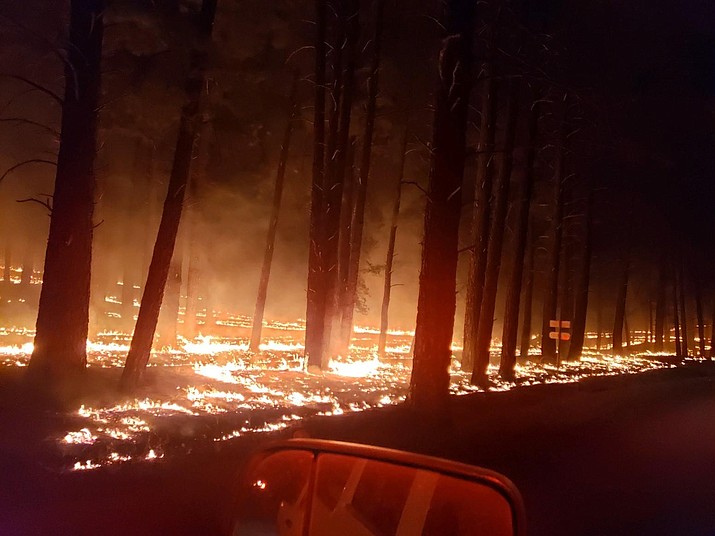 A photo taken of the Sheridan Fire Tuesday night, Aug. 20. The fire continues to burn 23 miles northwest of Prescott. (USFS/Courtesy)

Though increased humidity in the afternoon caused the fire to not burn as actively as anticipated, fire crews succeeded in igniting vegetation along the western edge of the Sheridan Fire containment line Tuesday, Aug. 28. The fire now exceeds 13,000 acres.

Fire crews will again work on firing along the western containment line throughout Wednesday.

There was a new lightning-caused fire start Tuesday just to the east of the Sheridan Fire within the fire area. Firefighters are suppressing that fire rather than allowing it to assist the forest in restoration efforts as they are the Sheridan Fire. Each fire is a bit different and fire managers evaluate each new start to determine whether to immediately suppress it or allow it to burn naturally. The new start was not in an area where resources would benefit greatly from fire at this time.

Because of the planned burning Wednesday, smoke from the Sheridan Fire may be more noticeable, although the humidity will likely keep the fire from becoming very active. Smoke may visible over most of the Prescott and Tri-City area, particularly in the afternoon and early evening hours. Smoke impacts extend mainly to the north and northeast of the general fire area. Fire operations managers attempt to minimize smoke impacts when and where possible.