As opioid settlements grow, so do questions about the money
Prescott officials react to Oklahoma ruling 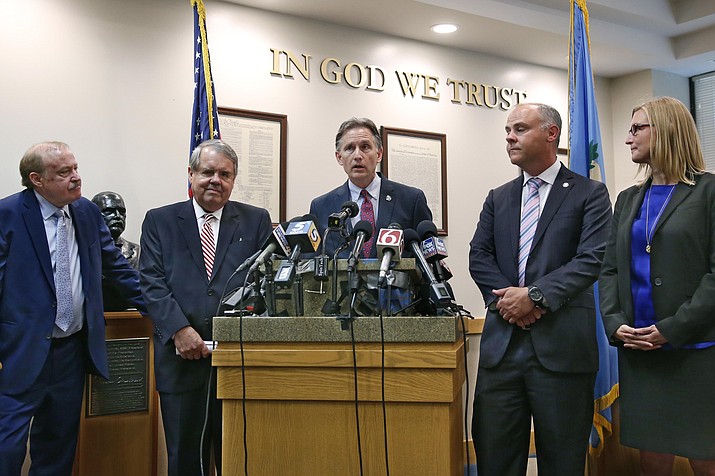 OKLAHOMA CITY — Oklahoma’s legal fight against the opioid industry has racked up settlements and judgments of nearly $1 billion, but as the numbers keep rising, so do concerns over how that money will be spent.

Experts say the $572 million judgment issued Monday against consumer products giant Johnson & Johnson could pay for a year›s worth of statewide drug-treatment efforts. But the company has already announced plans to appeal, which could tie up the money for years. Meanwhile, addiction counselors worry about when their clients might get more help.

“We get applications every day from people who want help but don’t have the funds to come into our program,” said Lance Lang, who is recovering from an opioid addiction and now helps operate an Oklahoma City nonprofit that provides housing for others suffering from addiction.

Cleveland County District Judge Thad Balkman ordered the payment after ruling that Johnson & Johnson and its subsidiaries helped fuel the state’s opioid crisis. The judgment was more than twice the amount Oxycontin-maker Purdue Pharma agreed to pay in a separate settlement.

The allegations against Johnson & Johnson were the first state opioid case to make it to trial, and the outcome could help shape negotiations involving roughly 1,500 similar lawsuits filed by state, local and tribal governments. Those governments are seeking to recover costs ranging from packed jails to overworked coroners and public defenders. Their cases have been consolidated before a federal judge in Ohio.

In Prescott, Arizona, the opioid epidemic has resulted in a local lawsuit.

“(On Aug. 26), alongside thousands of other local governments in this country, we were gratified to learn — after an eight-week trial in Oklahoma state court — that the Honorable Thad Balkman agreed with us that the municipalities in this country have been ravaged as a result of the opioid epidemic, and that Johnson & Johnson (“J&J”) (and by logical extension its fellow opioid manufacturers) are the cause of that epidemic,” said acting Prescott City Attorney Matthew Podracky.

Specifically, Judge Balkman stated that “based upon [his] finding that the defendants’ false, misleading, and dangerous marketing campaigns have caused exponentially increasing rates of addiction, overdose deaths, and Neonatal Abstinence Syndrome, [he] conclude[s] these are unlawful acts which ‘annoys, injuries, or endangers the comfort, repose, health, or safety of others.”

Judge Balkman therefore concluded “that (a) defendants engaged in false and misleading marketing of both their drugs and opioids generally; and (b) this conduct constitutes a public nuisance under extant Oklahoma law.”

This is only the beginning, said attorney Jeffrey Reeves, Esq., partner with Theodora Oringher PC, on behalf of the City of Prescott.

defendant opioid manufacturers and distributors will recognize their ethical, and now legal, obligation to the City of Prescott to provide the funding and resources necessary to abate the nuisance that they brought to our community.”

Lang, who said he became hooked on painkillers after getting his wisdom teeth pulled, said entry into a sober-living home costs about $750 up front and $600 per month.

Oklahoma’s first settlement — a $270 million deal with Purdue Pharma — was almost entirely earmarked for an addiction research center at Oklahoma State University. It faced fierce criticism from the families and survivors of the nation›s opioid crisis, who said they wanted a trial to reveal more details about Purdue›s responsibility for the epidemic.

None of the money from Purdue will be spent until a trust has been set up to oversee the funds. A separate $85 million settlement was reached later with Israeli-owned Teva Pharmaceutical Industries Ltd.

“I fear that if the state’s decision on how to spend the Purdue settlement money is any guide, they’re going to fumble the ball and more people are going to die as a result of it,” said Ryan Hampton, who also battled an opioid addiction and wrote a book on the crisis titled “American Fix — Inside the Opioid Addiction Crisis and How to End It.”

“I’m all for research, but spending such a large proportion of money on research at this point when we have people who are literally dying on street corners in Oklahoma because they can’t access services? That is a crime in itself.”

Hampton emphasized treatment options that support not just recovery from opioid addiction, but also other drugs and alcohol.

“The bottom line is that if we’re not setting up an infrastructure that’s all inclusive for behavioral health and addiction services, then we’re setting ourselves up for failure,” he said.

Terri White, commissioner of the Oklahoma Department of Mental Health and Substance Abuse Services since 2007, defended both the state’s settlement with Purdue and the plan for using the judgment from Johnson & Johnson.

The plan “is evidence-based. It’s the gold standard,” White said. “The primary components are prevention and medication-assisted treatment, which is the cutting-edge.”

White acknowledged the state’s 30-year plan called for more than $17 billion and that the money from Johnson & Johnson alone isn’t enough to stop the crisis.

“I think this is going to be a giant first-year step, but I do think it will take more than one year,” she said.

Oklahoma judge rules against drugmaker, orders $572M payment
Oklahoma judge reduces J&J order in opioid lawsuit by $107M
Maker of OxyContin agrees to $270M settlement with state of Oklahoma
Opioid settlement would use a formula to split the money