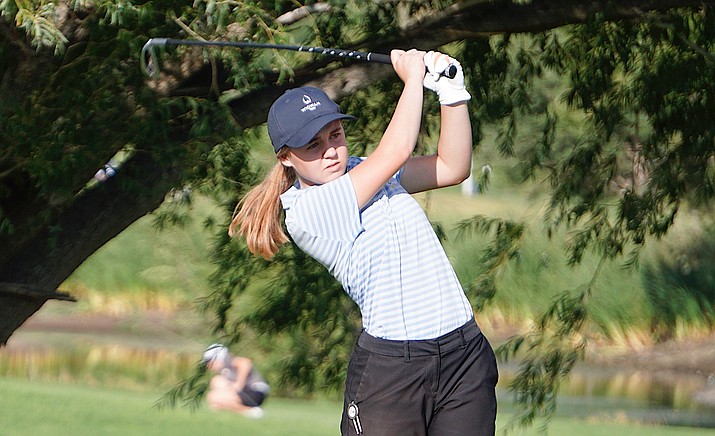 PRESCOTT — While opening the season with back-to-back wins may not seem wildly impressive, what probably does raise some eyebrows is the Prescott girls golf team doing so in only its third year of existence.

After defeating Mingus last week, the Badgers returned home and bested Lee Williams by 17 strokes at Antelope Hills Golf Course on Tuesday. Head coach Debbie Fitzgerald said she is proud of the rapid growth her players have made in such a short amount of time, especially considering that a varsity squad has only been around for two years. 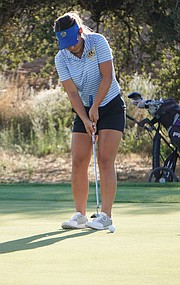 Prescott golf’s Makayla Reyes sinks a putt on the ninth hole at Antelope Hills Golf Course during a development-league match against Peoria and Barry Goldwater on Wednesday, Aug. 28, 2019 (Aaron Valdez/Courier)

“Having only three years in the program, they’re doing excellent. I’m very proud of how they are performing and working every day,” Fitzgerald said. “Their desire and drive are there. Their commitment is there to the program. They know they can achieve a lot of good things this year.”

Despite them putting up a better performance overall against Mingus, the Badgers fared the warm and windy conditions at Antelope Hills rather well. Prescott players owned three of the top 5 spots as Brannagh Woods finished first with an 8-over par score, Kaity Kasun placed second with a 13-over score and Joanna Osterloh placed fifth with an 18-over score.

Lauren Mayhan’s 20-over score rounded out Prescott’s overall team score of 203 (+59) while Lee Williams finished with a total score of 220 (+76). Coming in right behind Mayhan were three other Badgers, including Hailey Mayhan with a 20-over, Alayna O’Niell also with a 20-over and Makayla Reyes with a 23-over.

“We actually struggled with the short game today and I think it was more of the wind … but the girls battled,” Fitzgerald said. “My No. 1 and No. 2 obviously led us and then my other girls followed in, picked up the pace, and helped us pull out a win.”

On Wednesday, some Prescott players returned to Antelope Hills to play in a development-league match against Peoria and Barry Goldwater. Ava Cariaga, Talisa Bruce, Abby Harris and Reyes helped lead Prescott to a first-place finish with 30 points while Peoria placed second with 27 and Barry Goldwater came in third with 20.

The Badgers will hit the links again when they host Saguaro in a non-section match on Sept. 9 at Antelope Hills Golf Course. Tee time is set for 3 p.m.