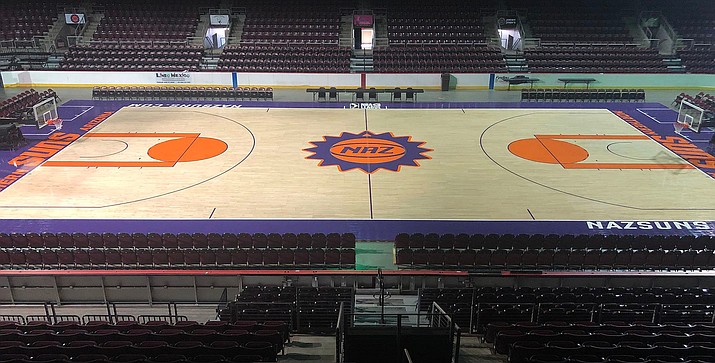 A new court design for the Northern Arizona Suns was revealed in early August at the Findlay Toyota Center in Prescott Valley. The Suns announced their 2019-2020 regular season schedule Monday, Aug. 26, 2019, opening their fourth season in Prescott Valley against the Agua Caliente Clippers on Nov. 9. (NAZ Suns/Courtesy) 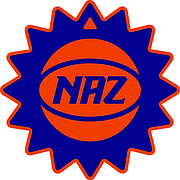 It is the fourth straight year Northern Arizona has opened the regular season on their home floor in Prescott Valley.

The Suns, which finished last in the Western Conference a season ago with a 12-38 record, open their fourth season in Prescott Valley against the Agua Caliente Clippers on Nov. 9 at the Findlay Toyota Center.

Eleven of the Suns’ first 16 games are scheduled as home games in Prescott Valley, while 11 of their final 16 games will be on the road.

Last season, Northern Arizona ended the 2018-19 campaign with six-straight home games. The Suns never have more than three games in a row at home, or on the road this season.

After Agua Caliente on Nov. 9, the Suns host Texas (Nov. 13) and Rio Grande Valley (Nov. 17) before hitting the road to play Santa Cruz on Nov. 21. The Warriors finished second overall in the Western Conference with a 34-16 record a season ago.

The Suns will host Iowa (Nov. 26) two days before Thanksgiving Day, but will play back-to-back road games at Sioux Falls right after (Nov. 29-30).

The Suns will begin the toughest month of their schedule at Iowa on New Year’s Day as eight of the 13 games in January will be on the road.

Finally, the Suns will play five of their last six games on the road, including two against former head coach Ty Ellis at Stockton (March 18, 20) and at Memphis (March 27, 28) to end the season.

The Suns have not made the G League playoffs in their four years of existence in Prescott Valley.

Northern Arizona is scheduled to host open tryouts Sunday, Sept. 8, at the Findlay Toyota Center in Prescott Valley from 9 a.m. to 4 p.m.