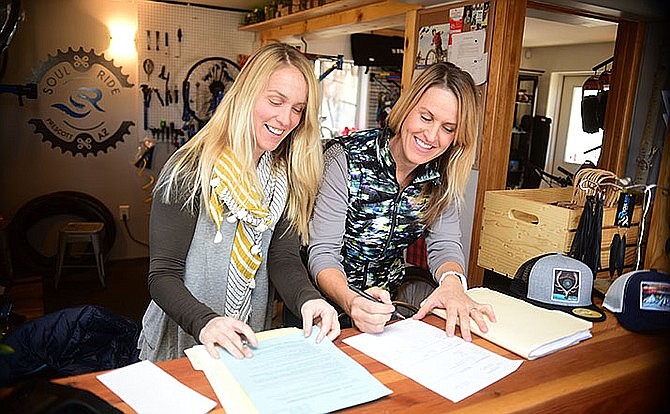 Kate Phelan and Cina McConaughy go through the paperwork they received after paying for the new City of Prescott Business License in January 2017. The City Council is poised to take a look at whether the program should be continued. (Les Stukenberg/Courier, file)

Nearly three years after the City of Prescott implemented a business license, the City Council is poised to take a look at whether the program should be continued.

Prescott Budget and Finance Director Mark Woodfill said the business license program is scheduled for a review by the City Council next month.

“We have heard questions, comments and concerns from the council,” Woodfill said of the business license program that was approved by the City Council in May 2016 and became effective on Jan. 1, 2017.

Some of the council’s concerns arose at a June Prescott City Council candidate forum, during which the three incumbents running for re-election to the council – Mayor Pro Tem Billie Orr, and councilmen Jim Lamerson and Steve Sischka – all voiced concerns about continuing the program.

Among the concerns, which the candidates voiced in response to a question from the audience, were: whether the business-license program is paying for itself; whether it is needed any longer since Prescott has largely handled the sober-living home issue that the community faced in 2016; and whether the program is merely “building bureaucracy.”

Prescott Mayor Greg Mengarelli said Friday, Aug. 23, that he also supports reviewing the program to see if it is doing what the council initially intended.

“I definitely want to take another look at this,” Mengarelli said. “I would like to hear from Mark Woodfill on [the business license program’s] pitfalls and strengths.”

On of Mengarelli’s concerns centers on the license requirements for temporary vendors.

“I want to look to see if it’s been effective,” Mengarelli said.

According to a report that Woodfill’s department prepared for the council in May 2019, the city currently has 4,713 business licenses.

The report noted that 95% of the city’s customers renewed their licenses on time this year, and most of the remaining 5% had renewed after being contacted.

The city’s 2016 approval of the business-license program came after years of discussion and several earlier unsuccessful attempts.