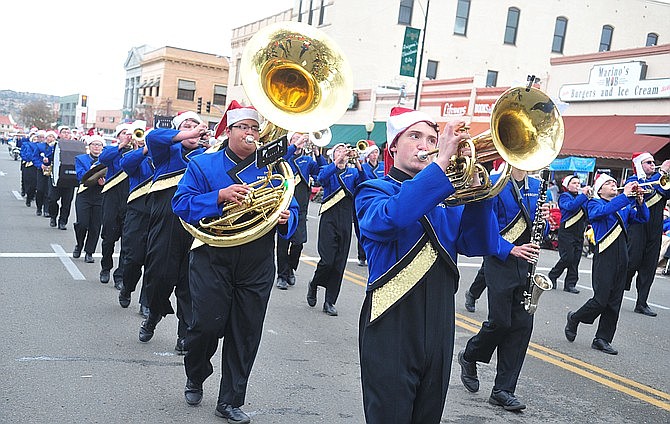 The Prescott High School marching band participates in the downtown Christmas parade Dec. 1, 2018, in Prescott. The Pride of Prescott Marching Band and String Orchestra has been invited to perform in the Pearl Harbor memorial commemoration events on Dec. 7, 2019 in Honolulu, Hawaii. (Les Stukenberg/Courier, file)

The Pride of Prescott Band Boosters are organizing a downtown luau on Friday, Sept. 13.

The fundraising campaign is to offset costs for 55 band and orchestra members who will be Arizona’s ambassadors to Hawaii for the commemoration ceremonies of the attack on Pearl Harbor, Dec. 7, 1941.

The high school musicians will spend a week on the Hawaiian island of Oahu participating in various commemorative and education enrichment activities. The orchestra will perform dockside at the USS Missouri on the anniversary and the marching band will participate in the annual parade along Waikiki Boulevard in Honolulu. All of the students, and their chaperones, are slated to take a tour boat to the USS Arizona Memorial where they will lay a wreath in the room that contains the names of the 1,102 lost sailors and Marines.

The USS Arizona Memorial is now under renovation. Museum officials hope tours will resume before the Pearl Harbor anniversary ceremonies.

On Dec. 7, 1941, the USS Arizona battleship was destroyed during the attack on Pearl Harbor, and the memorial marks the final resting place of 1,102 of the 1,177 sailors and Marines aboard that ship when the surprise attack occurred, decimating much of America’s Pacific fleet, according to national historic documentation. The day after the attack the United States Congress declared war on Japan, and then-President Franklin Delano Roosevelt declared Dec. 7, 1941 as a “date which will live in infamy.”

The cost for the Dec, 2-Dec. 8 trip is about $2,500 per student, but the band boosters have already raised $12,000 to help reduce the price tag for those students through various fundraising efforts. The luau is scheduled as an additional featured fundraiser specifically for the Pearl Harbor trip. All the proceeds are slated to help further reduce those costs. The intention is that all students will have the price reduced by about half the full price, according to band and school officials.

Each student is required to contribute a minimum of $200 to the trip, band officials explained.

Hawaii trip coordinator and booster secretary Traci Rainey, has reserved the Holiday Courtyard and Holiday Ballroom on South Montezuma for the luau event that will be held from 5 p.m. to 10 p.m. on Sept. 13. The Pride of Prescott Band will perform some patriotic songs to kick-off the evening that will then continue with the high school Color Guard performing a luau. Once they are finished, attenders will be treated to additional live entertainment from the Cross-Eyed Possum, a local folk/rock band founded by Prescott High band and orchestra musicians Jonah and Jason Howard – their father is PUSD’s Superintendent Joe Howard – and Claus and Affect.

All adults who buy a $40 ticket will be treated to an event-specific dinner and beverages – alcohol will be served after the high school band departs. Rainey assures this will be a “fun” night that will offer additional financial support to enable these musicians to participate in a once-in-a-lifetime experience.

Prior to the luau, the Pride of Prescott will also perform patriotic music for the “Welcome Home Charlie 158” event scheduled for 11:30 a.m. on Saturday, Sept. 7 at the Yavapai County Courthouse plaza. The Prescott Band Boosters will have a booth with information about the band and orchestra and will be giving out water for donations. Student performers will also be distributing American flags for donations.

Anyone wishing to purchase advance tickets to the luau can do at www.prescottbandboosters.com.