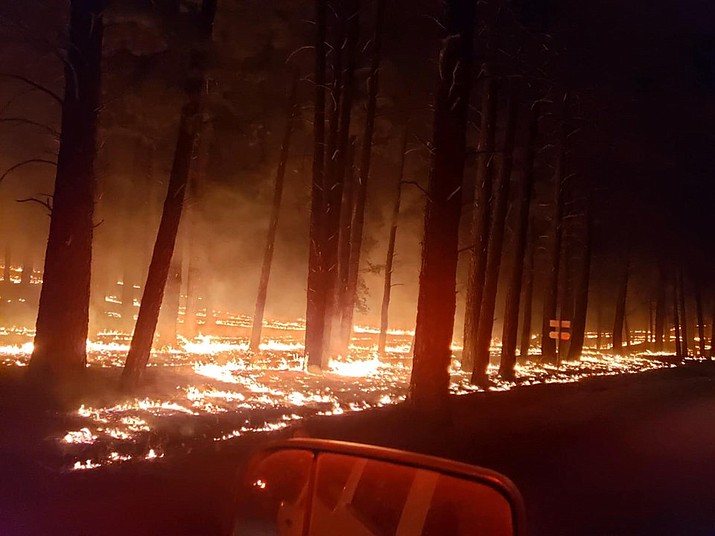 This photo shows firefighters taking advantage of cooler nighttime conditions to introduce fire into the ponderosa pines in the anticipated path of the Sheridan Fire. By doing this, it helps to reduce the potential for extreme heat and high intensity fire of the advancing fire front during the heat of the day. The Sheridan Fire is burning 23 miles northwest of Prescott and has charred an estimated 9,826 acres. (PNF Facebook Page/Courtesy)

Firefighters working the Sheridan Fire took advantage of cooler nighttime conditions to do several controlled burns in the anticipated path of the Sheridan Fire to help reduce fuels, according to a Prescott National Forest press release Sunday afternoon.

By doing this burn, it helps to reduce the potential for extreme heat and high intensity fire of the advancing fire front during the heat of the day, the statement said.

This works to protect the trees from damage or mortality as well as slowing the forward momentum of the fire and creating a buffer for areas ahead of the fire. This also allows firefighters to work more directly and safely in the fire area.

The results of low intensity burning is also beneficial, returning nutrients to the soil and removing competing, unhealthy or non-native or invasive vegetation.

The Sheridan Fire is burning 23 miles northwest of Prescott. It was started via lightning Aug. 5 and has charred an estimated 9,826 acres. It is 0% contained.

The Sheridan Fire experienced little growth Saturday and into Sunday morning as temperatures have moderated somewhat and humidity has increased as fire in this vegetation type is very sensitive to fluctuations in temperature and humidity.

Firefighters are continuing to use a helicopter and agency operated drones to monitor fire activity as access to the immediate fire area is limited, mostly due to lack of road access and the rough and rugged terrain.

Smoke from the Sheridan was relatively slight yesterday. Smoke may continue to be visible from Prescott and the Tri-City area during the afternoons and into the evening hours but should not be particularly heavy. Smoke impacts extend mainly to the north of the general fire area. Fire operations managers attempt to minimize smoke impacts when and where possible.

A smoke monitor has been installed in Paulden and it is showing air quality to have remained in the “good” range throughout the day yesterday. We will continue to monitor smoke and will post advisories if an unhealthy range is expected or detected.