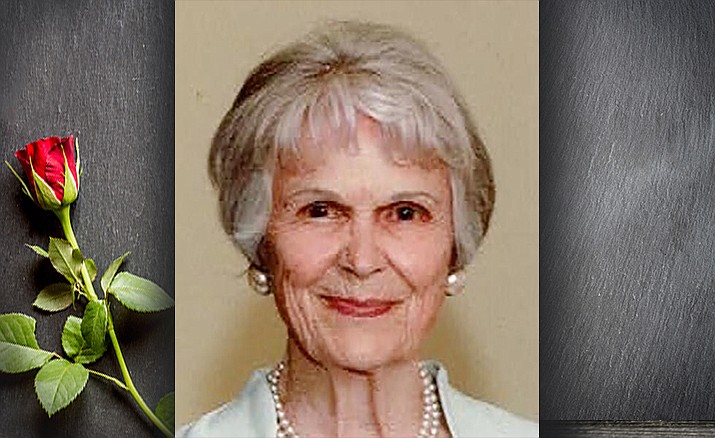 Jane Ellen “Janelle” (Marks) Cooper, age 99, of Paulden, Arizona, passed away peacefully on Sunday, July 28, 2019. She died with as much grace as she lived, surrounded by family and dear friends.

Janelle was born May 31, 1920, in Los Angeles, California, to Jasper Glenn Marks and Florence Pixley Marks, the second of two children.

She attended the Marlborough School in Los Angeles and graduated from Stanford University in 1942. During her junior year in high school, she met the love of her life, Jeff. They eloped in February 1942, she a senior at Stanford, he a commissioned second lieutenant in the Marine Corps, in the throes of World War II. Together, they would lead an extraordinary life through 64 years of marriage; winning dance contests, enduring wars, raising a family, starting a world-renowned institution, and traveling the world.

After raising their three daughters in the Big Bear Lake area of California, Jeff and Janelle moved to Paulden, Arizona, in 1975 to fulfill Jeff’s vision of creating a school where the private citizen could learn the fundamentals of self-defense through personal firearms training. They started the American Pistol Institute in 1978, which would later become known as Gunsite Ranch (now Gunsite Academy). As the perfect complement to Jeff, Janelle’s steadfast devotion to her husband facilitated the success of his vision. Janelle’s charm, grace, and warm hospitality greeted decades of students and instructors, leaving her with lifelong friends far and wide.

After Jeff’s passing in 2006, Janelle carried on in their home at Gunsite Ranch, known as “the Sconce,” until her death. She continued to open her home to students graduating from the 250 pistol class at Gunsite, offering her famous brownies and “Arnold Palmers” (iced tea and lemonade), as well as a tour of the home which displays a lifetime of history. She (with family) started the Jeff Cooper Legacy Foundation in 2006, and served as its president until her death.

The epitome of grace and strength, Janelle was a remarkable woman in countless ways. She was beautiful, dignified, humble, gracious, sharp, generous, and incredibly resilient.

She could intelligently converse with anyone about almost anything, and attributed her longevity and vigorous good health to maintaining a positive outlook. The world is diminished by her loss, but her legacy will live on through the many lives she has influenced.

She is survived by her beloved daughters, Christy (Charles) Hastings, Parry (Bruce) Heath, Lindy (Joe) Wisdom; grandchildren Amy (David) Lovato, Vicky (Cougan) Carothers, Lisa (Brian) Altevogt, Tess (Jeremy) Jones, Tyler (Jenny) Heath; 13 great-grandchildren, and many, many dear friends. She has been interred beside her husband in the mausoleum at Gunsite in a private ceremony.

A memorial celebration of life will be held at St. Luke’s Episcopal Church, 2000 Shepherds Ln. in Prescott, on Saturday, Sept. 28, at 11 a.m. In lieu of flowers, donations can be made to the Jeff Cooper Legacy Foundation (jeffcooperfoundation.org). Arrangements entrusted to Hampton Funeral Home.