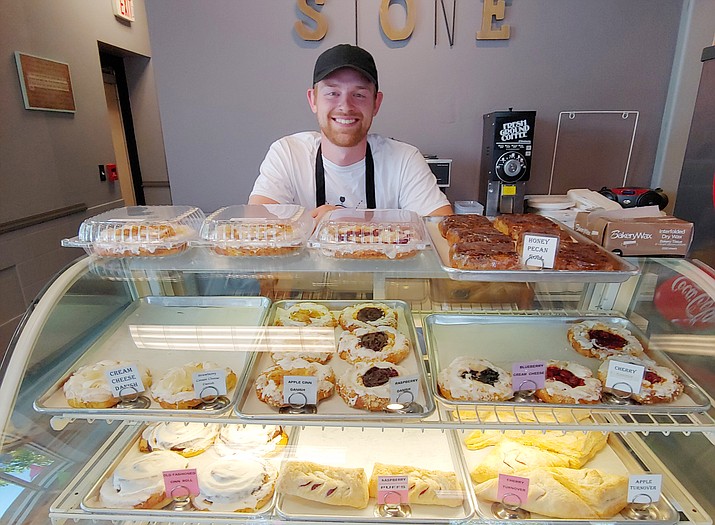 The new Flour Stone Café, 2992 N. Park Ave. in Prescott Valley, is spacious with several tables and chairs in the dining room near the kitchen and the bread and pastry counters. (Doug Cook/Courier)

If you’re in the mood for some tasty treats, drop by Flour Stone Café, which recently relocated from Mayer to 2992 N. Park Ave. Suite C in Prescott Valley, right next to Garcia’s Mexican restaurant in the Entertainment District.

On Sept. 24, 2015, local resident Igal Blumstein (pronounced EE-gal Bloom-steen) first opened Flour Stone Bakery on Central Avenue in Mayer. The bakery conducted its business there in a historic building for two years before moving to another spot in Mayer off Highway 69 where the former Teskey’s Restaurant & Grill had stood.

The new Flour Stone Café, 2992 N. Park Ave. in Prescott Valley, is spacious with several tables and chairs in the dining room near the kitchen and the bread and pastry counters. (Doug Cook/Courier)

On Aug. 16, Blumstein, 63, and his sons, Benjamin, 23, and Jeremiah, 22, reopened in the Prescott Valley Entertainment District, where they feel they can serve more customers with an eight-person staff.

“Business has been good throughout,” said Benjamin, 23, a full-time employee at the café with his wife, Peyton. “Friday and Saturday [Aug. 16 and 17] were really good for business. Monday was slower, but today [Aug.14] and yesterday [Aug. 13] were good.”

Benjamin said Igal learned a unique method of baking bread from his father, a Polish Jew who was a Holocaust survivor.

“My dad, at the age of 10, moved to New York and then settled in Connecticut, baking professionally,” Benjamin said. “My dad and his two brothers are bakers.”

Benjamin was born in Spokane, Washington, but he moved to Yuma with his family at age 2. His family relocated to the Quad Cities in 1998.

For 18 years prior to opening his own bakery, Igal was a bakery manager for the Safeway grocery store chain, working for stores in Prescott, Chino Valley, Anthem, Sedona and Flagstaff.

Today, Benjamin plays a prominent role in operating the new café for his father in Prescott Valley. Jeremiah has worked off and on at the new café because he was recently married and plans to go to school to become a radiology technician, Benjamin said. 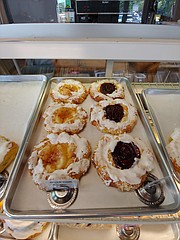 With the move to Prescott Valley, Four Stone Café’s menu has changed.

“We’ve added to the lunch menu,” Benjamin said. “We now have a veggie sandwich, a turkey club, and a grilled ham and swiss. We’ve also added a North of the Border chili burger and an Old Town blue cheese bacon burger.”

ALL ABOUT THE BREAD

Four Stone Café’s best known for its fresh bread, which has no preservatives, Benjamin said. A loaf of bread costs anywhere from $5.99 to $6.99. Igal bakes sourdough, marble rye and cinnamon raisin bread, as well as Challah, a Jewish egg bread sweetened with honey.

Igal rolls out the dough daily, in the wee hours of the morning. He also rolls and bakes his own Danish snails. Turnovers, cookies, brownies, cinnamon rolls, sweet buns, among other treats, are available, too.

In the past, Igal has baked specialty breads, such as French, dill rye, whole wheat and ancient grains.

“We make anything to order,” Benjamin said.

Benjamin made it clear that his father’s bread isn’t gluten free (gluten’s expensive) and that the bread should be refrigerated or frozen if it’s not all eaten within a few days or so of purchase.

This past week, Flour Stone Café’s hours were 7 a.m. to 2 p.m. Monday through Saturday, and it was closed on Sunday.

But, starting Monday, Aug. 26, through Saturday, Aug. 31, Benjamin said the café will conduct a trial period of being open from 8 a.m. to 7 p.m., while remaining closed Sunday. Benjamin said he’s noticed that business picks up in the entertainment district in the late afternoon and evening, and he’d like to capitalize on that.