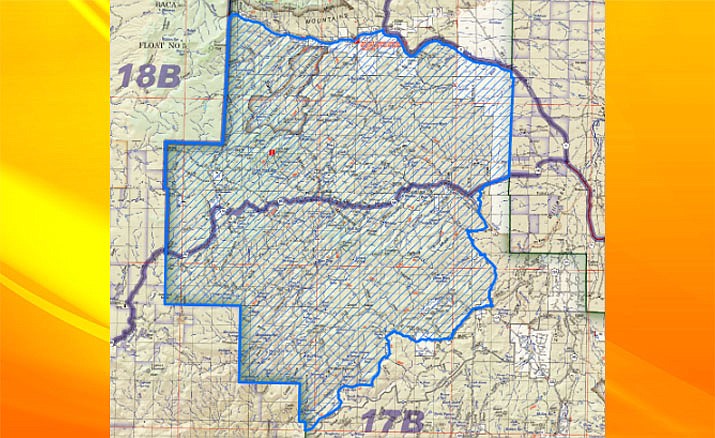 A map shows the closure area due to the Sheridan Fire. (PNF/Courtesy)

A slight rise in humidity in the Sheridan fire area has helped to moderate fire behavior and limit its growth, a Prescott National Forest Service release stated Saturday afternoon.

Fire crews were kept busy working indirectly, creating a buffer, enhancing control features, such as roads, trails, and natural features, north of the Camp Wood Road and in the area near Brush Mountain.

The Sheridan Fire is burning 23 miles northwest of Prescott on the Chino Valley District. It began Aug. 5 via lightning strike and has grown slightly to 9,449 acres. It is 0% contained.

The fire continues to burn in overgrown chaparral, grass and brush. The higher humidity has slowed the fire spread. Firefighters continue to work to create buffers and enhance control features such as roads, trails, adjacent to resources such as Yolo Ranch and cultural sites in the area, in an effort to protect them by either slowing or containing the advancing edge of the fire.

Firefighters are currently working south along the 702 road. A helicopter will be flying the fire perimeter today conducting a mapping mission to account for Saturday’s limited fire growth.

Visible smoke will continue to decrease today due to the moderated decrease in fire behavior due to the increase in humidity. Incident specific smoke monitors are in place near Paulden to monitor area impacts.

While smoke conditions should continue to decrease today, for those more sensitive to smoke, we recommend staying indoors with windows and doors closed and bringing pets inside.