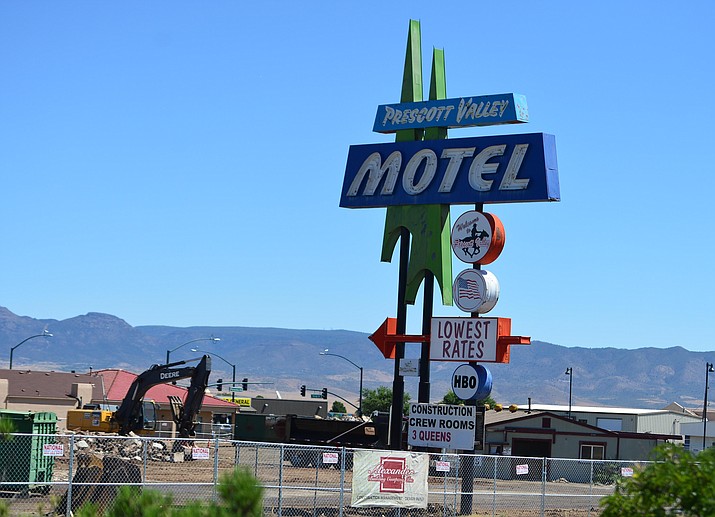 On a hot and sunny summer morning Aug. 12, Prescott resident Paula Gallay parked and hopped out of her car on the side of the frontage road by the Prescott Valley Motel, 8390 E. Highway 69, to snap a few photos of the motel’s vintage 1960s-era neon sign.

Chain-link fencing now surrounds the motel, which was built in 1969 and was the first in the town’s history. The motel is in the process of being demolished to make room for a new super-sized Circle K gas station and convenience store at the northwest corner of Highway 69 and Navajo Drive.

Gallay said she’s an aficionado and a collector of mid-century modern ad signs, ones with neon lights similar to the one at the motel. The PV Motel sign has seen much better days, but it’s still big and bright, and you just don’t often see these slices of Americana anymore.

In fact, the sign is about as old as the town, which was born in the mid-1960s 15 miles east of Prescott. It was officially incorporated in 1978.

“That’s a beauty,” Gallay said of the “Googie-era” sign as she directed her handheld digital camera skyward. “I figured I better take a picture before they take it down.”

That day, as she was driving down the highway, she happened to notice the backhoes and other heavy construction equipment that were being used to cut back trees and bushes on the property. She wondered aloud what would become of the sign.

Scottsdale-based Alexander Building Company’s Dylan Hasse, who is in charge of building the new Circle K, said Circle K officials told him to keep the shell of the Prescott Valley Motel sign so that it could be reconfigured.

As of Friday, Aug. 23, the original sign still hadn’t been touched. The Prescott Valley Historical Society has already said that it couldn’t do anything with the sign because it is so large. Essentially, the society doesn’t have the space to house the sign for preservation.

Hasse, the project engineer for the new Circle K, said Aug. 13 that it would take at least two weeks to knock down the motel. That’s partly because demolition crews first had to go into each of the motel’s rooms to remove asbestos in the popcorn ceilings.

This past week, demolition of the motel was well underway, although it hadn’t been complete as of Aug. 23. One section of the motel on the west side that had housed the motel bar and sports room and several other motel rooms, as well as the manager’s office on the east side, still stood.

But the fate of the remnants of the hotel is all but sealed. In September, preparations will be made for building the new Circle K.

Demolition of the motel has been in the works for months now. On July 3, Prescott Valley Economic Development Coordinator Ben Hooper sent Prescott News Network an email stating that demolition of Prescott Valley Motel would likely happen in mid- to late-July.

Suzy Peel, director of real estate development for the Circle K Corporation, has not returned phone calls to comment about the project. However, Hooper stated that Circle K’s plans were to “break ground on the project before the end of year.”

Hooper added that because Prescott Valley Motel rests in a C2 Zoning District, Circle K does not need Planning & Zoning or Town Council approval for its site plans.

“Once our Community Development staff has reviewed it and ensures they are in compliance with building codes and other standards,” Hooper stated, “we will issue them a building permit and they can begin construction.”