Update: Sheridan Fire roars to 8,500-plus acres, doubling in size

The Sheridan Fire, seen in the distance from Prescott at sunset Wednesday, Aug. 21, 2019, is burning 23 miles from Prescott and has doubled in size to more than 8,500 acres. (Les Stukenberg/Courier)

The Sheridan Fire, influenced by unseasonably hot, windy and dry conditions, made a push northward, more than doubling in size to an estimated 8,594 acres, according to a Prescott National Forest Service press release Thursday afternoon.

Forest official are looking to expand the Fire Area Closure to include area north of the Camp Wood Road.

The Sheridan Fire burns 23 miles northwest of Prescott in the Chino Valley District. It began Aug. 5 due to a lightning strike and is currently 0% contained. 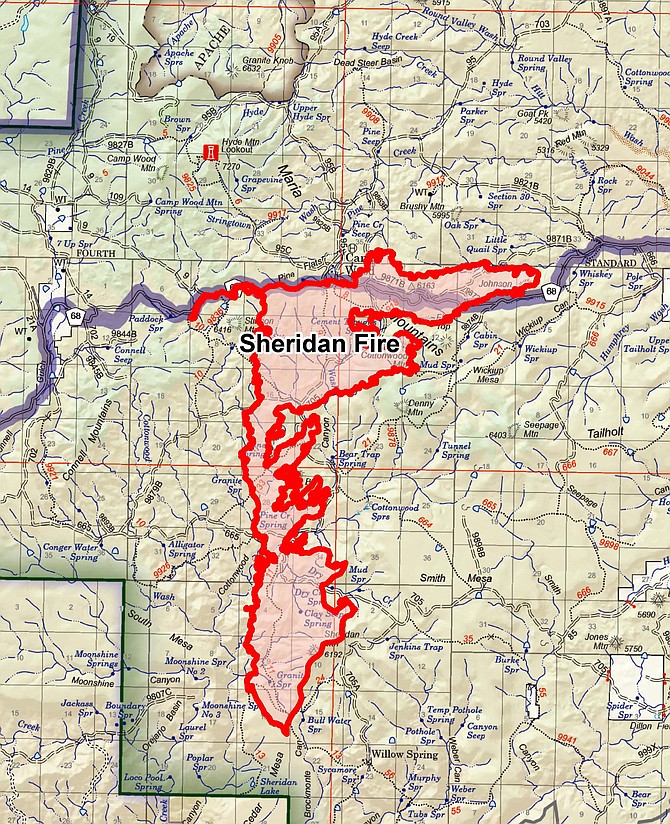 This map shows the area where the Sheridan Fire burns just 23 miles northwest of Prescott. (PNF/Courtesy)

Thick overgrown chaparral is the predominant fuel burning. Its fire behavior is highly influenced by wind and enhanced by the dry conditions. This brush type burns hot and fast, producing thick black smoke. The smoke effects to area communities is being closely monitored.

Smoke from the Sheridan Fire will continued to be visible from Prescott, Chino Valley and Williamson Valley during mid-afternoon and into the evening hours, extending as far north as Paulden, Ash Fork and Williams, relative to the predominant wind direction. Incident specific smoke monitors are in place north of the fire area to monitor area impacts.

With smoke impacts continuing to be expected, we recommend that the public plan activities during the earlier part of the day. For those more sensitive to smoke, we also recommend staying indoors with windows and doors closed and bringing pets inside. 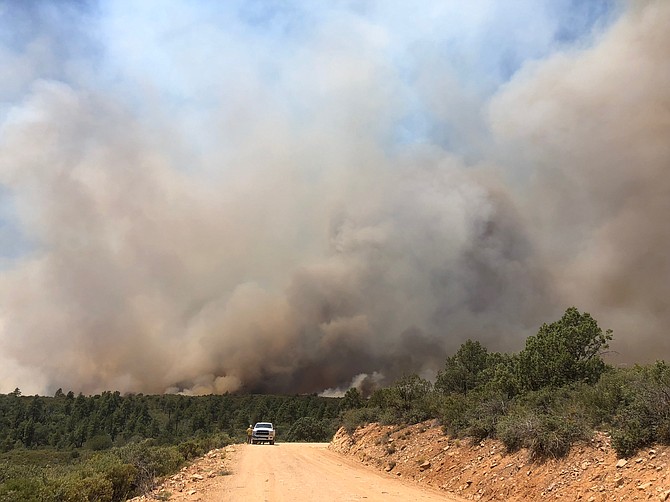 A photo of smoke from the Sheridan Fire as it burns 23 miles northwest of Prescott. (PNF/Courtesy)