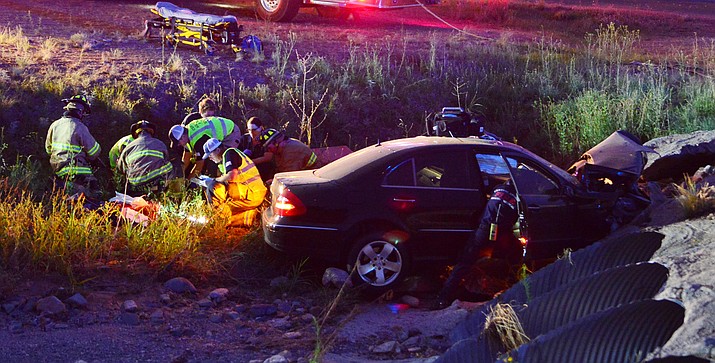 The single-vehicle wreck took place near the intersection of Lakeshore and Tonopah drives at about 7:15 p.m., said Jerry Ferguson with the Prescott Valley Police Department (PVPD).

Prescott Valley resident Suzanne Angelica, 57, was traveling east on Lakeshore Drive at a high rate of speed when her sedan careened off the road and crashed head-first into culverts under Tonopah Drive, Ferguson said.

“There was no indication of braking,” he said. Police suspect she may have suffered from some sort of medical issue that caused her to crash.

Seriously injured, Angelica was transported to Yavapai Regional Medical Center in Prescott Valley before being flown to John C. Lincoln Hospital in Phoenix. The Police Department later learned she passed away at the hospital because of internal injuries.

The investigation into the crash is ongoing, Ferguson said.