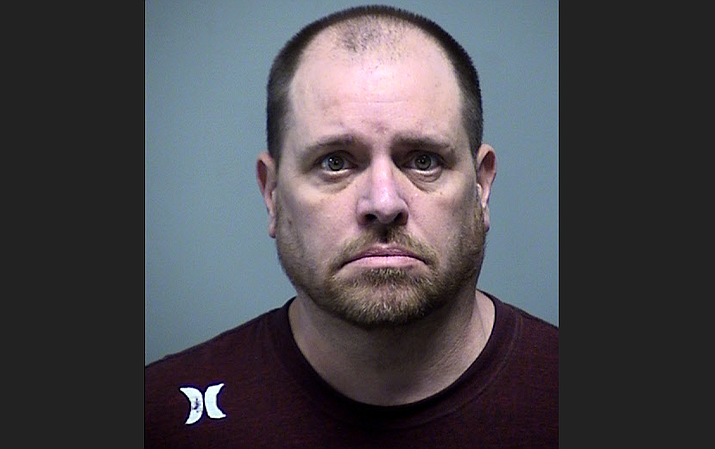 Brian Lee Benovsky, 49, was arrested after allegedly hitting a bicyclist with his car in Prescott Valley and then fleeing the scene Tuesday night, Aug. 20. (Prescott Valley Police Department/Courtesy

A man suspected of hitting a bicyclist with his car in Prescott Valley and then fleeing the scene was arrested Tuesday, Aug. 20.

At about 8 p.m. that night, the Prescott Valley Police Department (PVPD) was notified of a man lying in the roadway next to a bicycle at the intersection of East Frontage and North Starlight Drive in Prescott Valley, according to a PVPD news release. When they arrived on scene, fire and ambulance personnel were tending to an unconscious man in the roadway.

Witnesses told the police that, although they did not see the accident, they observed a vehicle leaving the area at a high rate of speed and that the vehicle had frontend damage and a broken windshield, PVPD reported.

An investigation revealed that the collision occurred when the vehicle struck the bicyclist, who was traveling in the same direction, and then fled the area.

The bicyclist was 72-year-old Prescott Valley resident Dennis Steinbauer, whose injuries included severe head trauma and loss of consciousness. He was flown to John C. Lincoln Deer Valley, where he remains in critical condition, PVPD reported.

A short time after the incident, Prescott Valley officers were able to locate a white 1995 Honda Civic with frontend damage that matched the evidence collected on scene. The owner of the vehicle, 49-year-old Prescott Valley resident Brian Lee Benovsky, was arrested and booked into the Yavapai County jail for three felony offenses: hit and run with serious physical injury, aggravated assault and endangerment.

“The police department acknowledges the value of cooperative witnesses who are willing to provide valuable information,” PVPD spokesperson Jerry Ferguson said. “Although situations occur quickly, observant and attentive onlookers are an important part of keeping our community safe.”