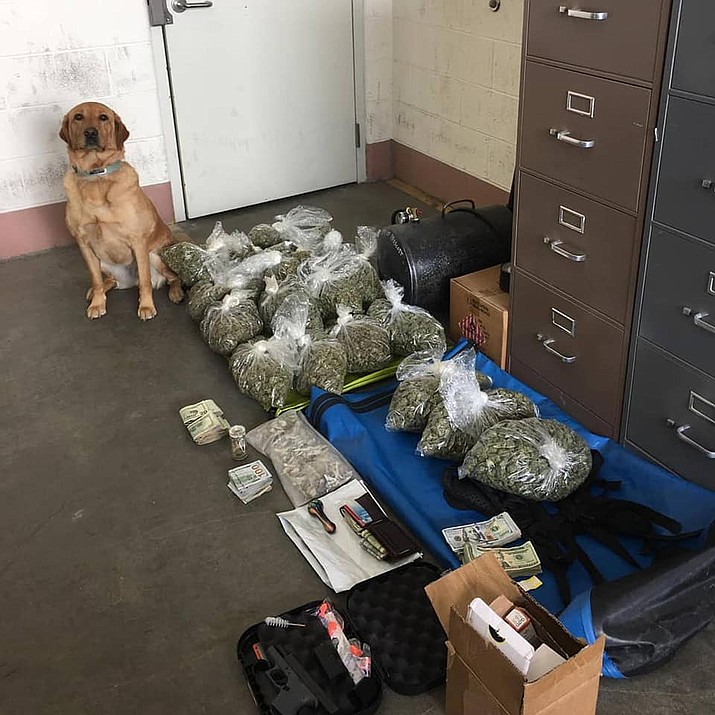 Prescott Police Department K9 Blue poses next to a large amount of marijuana and other contraband seized during a drug bust in early April 2019. As of July 1 2019, Blue and his handler, officer Shawn Bray, were assigned to assist Partners Against Narcotics Trafficking with drug interdiction and investigations. (Prescott Police Department/Courtesy, file)

The result was overwhelmingly positive.

“Across the board, law enforcement, city and town councils and the board of supervisors; everybody just really stepped up,” said Yavapai County Attorney Sheila Polk, who sits on the PANT Advisory Board.

Future funding for PANT became a concern within the last year due to recent changes in law and criminal activity.

For about the last 20 years, the task force has been partially funded by seized money obtained through a state program called civil asset forfeiture. Commonly referred to as RICO — short for the Racketeer Influenced and Corrupt Organizations Act — the program is designed to undercut the profits of wrongdoers by seizing assets believed to be tied to criminal activity, such as drugs, cash, vehicles and weapons.

Those assets are returned only if either the state chooses not to proceed with legal action against the alleged wrongdoer or if owners of the property prove their innocence. Otherwise, the property is liquefied and used for law enforcement supplies and training in their efforts to specifically fight criminal organizations and/or aid victims. In Yavapai County, those forfeited funds are pooled into a single account, which Polk manages.

Once a month, Polk meets with all of the county’s law enforcement heads and they decide together to determine how that RICO money will be spent.

“Most of the money goes to support PANT,” Polk said. “We also try to make contributions to the (Yavapai) Family Advocacy Center.”

A substantial chunk of that RICO funding support for PANT was being used to cover the salary of the task force’s forfeiture investigator. But as of July, 2018, a new federal law was enacted that prevents the use of RICO funds to cover replacement salaries for officers who are specifically assigned to asset forfeiture duties, therefore eliminating Yavapai County’s ability to cover the PANT investigator’s salary with RICO funds any longer.

On top of this, there’s been a significant decline in asset forfeitures – specifically cash – throughout the country.

“We don’t see the money being transported like it used to,” Yavapai County Sheriff Scott Mascher said.

Illicit drug distributors have instead resorted to other means of transferring money, such as using digital currencies and pre-paid gift cards, which prevents law enforcement from confiscating the funds when they conduct drug busts, Mascher said.

Given this situation, Mascher was able to convince the Yavapai County Board of Supervisors this summer that PANT needs additional funding support from local governing bodies.

Not only did the board agree to incorporate into the county budget the salary costs of existing PANT positions within YCSO that were previously covered by RICO and grant funding, but they also agreed to fully fund two additional PANT sergeants and a detective.

For instance, Prescott Police Department, which was already fully-funding its single PANT detective, has now assigned a K9 unit to serve part-time with the task force and part time with the department. Half of the K9 officer’s salary is covered by PPD, while the other half is covered by a grant acquired by PANT through the Arizona Criminal Justice Commission (ACJC).

“We are committed to the ongoing support of PANT, and appreciate the multi-agency, collaborative approach to fighting narcotics trafficking, reducing overdoses and enhancing safety in the region,” PPD Chief Debora Black said.

Prescott Valley Police Department (PVPD), which has a PANT detective and sergeant, also absorbed some costs this fiscal year to assist with the PANT budget.

It is covering half of its PANT sergeant’s salary in addition to the detective position it was already fully funding. The other half of the sergeant’s salary is being paid for by the same ACJC grant funds PPD is using for its K9 position.

“The way we look at it in the police department is that PANT is not a single organization, it’s a task force, and the mission that it fulfills to combat the illegal trafficking of narcotics is shared by all of its members,” PVPD Interim Chief James Edelstein said. “We sustained the effort because we as an organization believe it is an important mission to sustain.”

Though the Chino Valley Police Department (CVPD) has not made any changes to its budget regarding PANT, it has offered to assist with paying for its PANT detective’s overtime hours – the department already fully funds the position’s base salary.

“[PANT] is still paying my detective’s overtime as of right now, but I kind of left it as a standing offer that if the budget ever gets to that point, I would pick that overtime up, because it’s just important to keep the task force going and being able to keep our detective in it,” CVPD Chief Chuck Wynn said.

With these changes, Polk is confident that PANT’s continued existence and growth is far more sustainable now that the task force’s reliance on RICO funds has been greatly reduced.

“I feel pretty secure that we will continue to get that support from the different funding councils,” she said. “Every year we’ll have to do a budget, of course. If the revenue isn’t there, I guess we’re always at risk of having to cut positions, but we haven’t had to do that yet.”