Don’t want to buy? You can borrow household items too 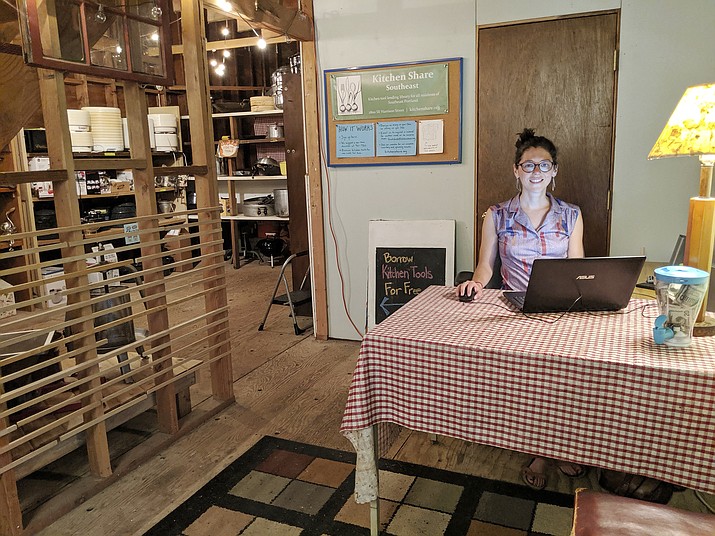 This photo shows founder Robin Koch at The Kitchen Share Library in Portland, Ore. Residents need only photo identification and proof of address to become borrowers. Housed in a church in Portland, Kitchen Share contributes to the city’s sustainability by creating a network of kitchen supplies that can be shared among local residents. (Amanda Blum via AP)

Amanda Blum enjoys trying new recipes and experimenting in the kitchen, but like many home cooks she’s reluctant to buy expensive and bulky kitchen appliances.

So she was delighted to learn about Kitchen Share, a nonprofit near her home in Portland, Oregon, that loans out kitchen equipment. Bloom, who likes to preserve fruits and vegetables at this time of year, found a name-brand pressure canner there that makes the task easier and safer.

“This is such a huge resource,” she said. “It so lves the problem of having to buy all these things.”

For traditional libraries, such items are a natural extension of their mission to provide resources to the community. Many of the other institutions see lending programs as a way to help people save money or lead more sustainable lives by owning fewer things.

As with books, “it’s the idea of collections that are purchased by a group and used by multiple people over and over again,” said Jen Lenio, collections manager of the Rochester Public Library.

The Rochester library system’s offerings are driven by patron interests, as well as a desire to assist low-income people, she said. The success of library craft classes inspired the staff to create borrowable knitting and crochet kits. Recognizing that the ability to make or repair clothes could be useful, the team purchased sewing machines that patrons can check out.

“We’re trying to fill needs that the community has,” Lenio said.

The Akron-Summit County Public Library’s cake pan lending program was so popular, the institution decided to buy kitchen tools to circulate too. The items — including measuring cups, kitchen scales and baking dishes — appeal to the area’s large student population and younger patrons setting up households, among others, said Monique Mason, manager of the libraries’ science and technology division.

“When you look how much space a pasta maker or a food dehydrator takes up — do you really want to have to store these items?” Mason said.

The library treats the items like books, allowing people to reserve them online and sending them to various branches for pickup, she said. Patrons are required to return the kitchen items clean, and are advised to wash them before using.

St. Louis County Library in Missouri has a telescope lending program, which was suggested by the St. Louis Astronomical Society. It began in 2014 and was an “instant hit,” said director Kristen Sorth said. “People seem very appreciative of the opportunity and treat them very well,” Sorth said.

Loaning telescopes aligns with the library’s interest in promoting science education, she said, by giving people access to cool equipment.

“I’ve done it a couple of times. I had one as a kid and I like to see what I can see in the night sky,” said Craig Williams of St. Louis, who hopes to own one someday.

In the twin cities, the Minneapolis Art Lending Library, a non-profit group, promotes art appreciation by lending out original works that borrowers can hang on their walls at home.

Part of a library’s mission is to help patrons learn, and that isn’t limited to books, says Christine Feldmann, a spokeswoman for the Anne Arundel County Public Library in Annapolis, Maryland, which loans out fishing poles and ukuleles, among other items.

“The library is really about connecting people with resources,” she said. “These programs are just an extension of that.”

Witucki: Beyond books: Libraries find other ways to serve
Check the fine print: Library item could be late, depending on where it originated, not where you picked it up
Report: 8 lenders aren’t serving people of color for home loans
For homebuyers, mortgages are safer but tougher to come by
Residents use of PV library is up 14%