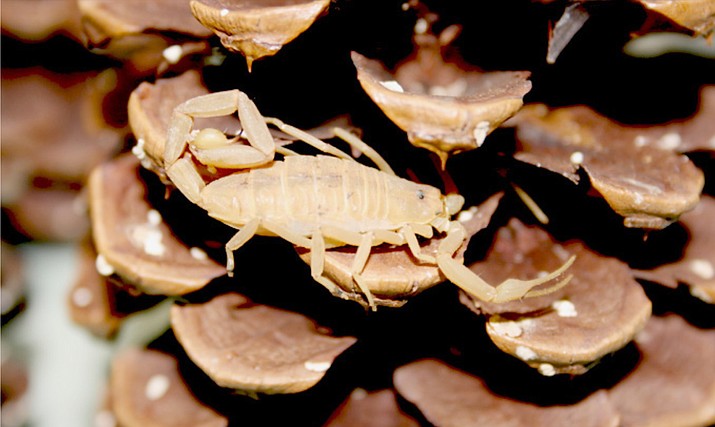 Scorpions are abundant in Arizona, and one or more species can be found in virtually every habitat from mountaintops to desert floors.

Of the 1,400 known scorpion species found worldwide, at least 30 of these occur in Arizona. Of these Arizona species, only the bark scorpion (Centruriodes sculpturatus) is considered life-threatening. In our area, bark scorpions can be found in wooded areas, wood piles, sheds and other above-ground, protected locations. It is a climbing species that never burrows.

Other Arizona scorpions also sting and can cause serious health problems such as anaphylactic shock in sensitive individuals.

All scorpions spend the light hours under cover or in burrows. At night, they emerge within their individual defended territories and wait to ambush prey. Their diets consist of insects, spiders, centipedes and occasionally, small reptiles and young rodents. They capture their prey with their pincers and kill or paralyze it with a sting, which is thrust over the back. Scorpions are only active when nighttime low temperatures exceed about 77 degrees F. I have seen them foraging for insects on our front porch in Prescott this summer.

Scorpions have an elaborate courtship ritual which involves “dancing” back and forth. Mating is done after the male deposits a spermatophore (sperm package) on the ground, positions the female scorpion over the package, and she picks it up and fertilizes her eggs. Scorpion babies are live born and the female carries the young on her back until they have gone through their first molt after which the young scatter to establish their own territories. They reach maturity in about one year and can live for several years.

Scorpions are food sources for several animals such as grasshopper mice, rodents, birds, and reptiles. Before you kill a scorpion, remember that scorpions are an important predator in local ecosystems. They usually live outdoors, but can become an indoor pest in some situations. For instance, if there is a cricket or cockroach infestation, scorpions may become more common indoors because they have a ready food source. Scorpions can also be brought into your home hidden in firewood and through poorly maintained door sweeps and window screens.

To protect yourself from an inadvertent scorpion sting, one should remove loose boards, woodpiles, rocks, and debris from areas immediately adjacent to the home. Wear leather gloves when moving object in yards and campsites. If you have seen scorpions indoors, shake out clothes, shoes, and other items that have been in contact with the floor. Always wear shoes when walking at night — indoors and out. Teach children to recognize and respect scorpions.

Scorpions can become household pests in newly developed areas and in rural settings. Homes near rivers and arroyos can also experience an influx of scorpions during summer monsoons as they may have been washed downstream. To patrol for scorpions, you may want to purchase a portable black (UV) flashlight. Scorpions fluoresce under UV light and can easily be located from a distance of several yards. Some people and some pest management companies use black lights to locate them, pick them up with a pair of kitchen tongs, place them in a well-sealed jar, and relocate them to undisturbed natural areas. Warning: never look directly at an ultraviolet light as it can damage the eyes.

Scorpions cannot be managed using pesticides alone. Therefore, best management is to modify the habitat surrounding the home and other structures. This includes: sealing and caulking your home, replace door sweeps when necessary, reduce clutter adjacent to structures which can serve as a harborage for scorpions, prune bushes and overhanging tree branches away from the structure, minimize the amount of firewood brought indoors at any given time, and otherwise discourage insects and other prey by modifying the habitat.

Respect scorpions and take appropriate precautions and you will minimize your chances of being stung. I’ve included additional references which include photos and additional management suggestions with the online edition (see URL below).

If stung by a scorpion (or concerned about any other poisonous organism), contact the Arizona Poison Control and Drug Information Center at 800-222-1222. This free, confidential service is available 24 hours per day, 365 days per year.

Spiders, scorpions and centipedes
Backyard Gardener: What’s up with the beetles that do headstands?
Dealing with indoor pests
Gardens home to both helpful, harmful insects
Spiders are among most effective predators of plant pests