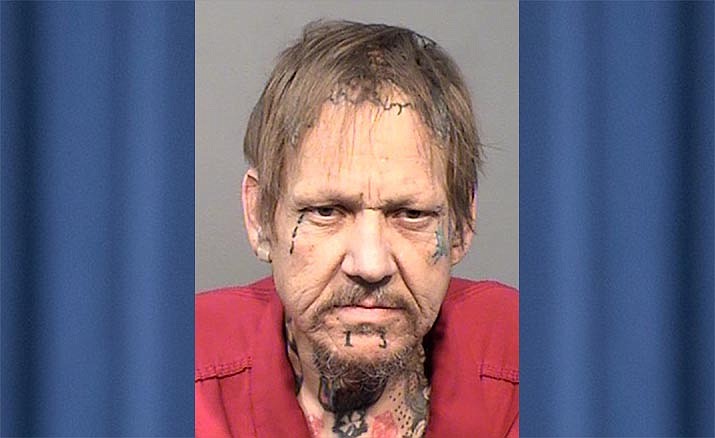 A Chino Valley man has been sentenced to serve 7 years in prison for possession of fentanyl for sale and promoting prison contraband.

Randal Arrington, 50, was initially arrested on June 2 while driving through Prescott with a man named John Stevens and Stevens’ 17-year-old son. All three were in a truck that police pulled over on Iron Springs Road based on information that drugs were being transported by the two men, according to the Yavapai County Sheriff’s Office (YCSO).

After a K9 alerted to the smell of drugs coming from the truck, police searched it and found a container with marijuana residue along with drug paraphernalia, YCSO reported. Arrington, who was driving the truck at the time, also had a suspended license.

Police arrested Arrington and Stevens and detained the 17-year-old based on these findings.

While being booked into the Yavapai County Jail in Camp Verde, Arrington was found to have a baggie containing 73 blue ‘M30’ pills tucked under his genitals, YCSO reported. These pills were later confirmed to contain fentanyl, a powerful synthetic opioid.

Since the pills were hidden on his person when he entered the jail, he was charged with promoting prison contraband, a class 2 felony, in addition to possession of a narcotic drug for sale, also a class 2 felony.

Arrington decided to plead guilty to the charges and was sentenced by Judge Thomas Kelly at the Yavapai County Superior Court in Prescott on Tuesday, Aug. 20.

Arrington already had an extensive criminal history, which weighed against him during the plea deal and sentencing. That history consisted of three prior felony convictions: the sale of a narcotic drug in 2013; unlawful use of means of transportation in 2011; and possession of dangerous drugs in 1993.

Immediately following his sentencing for the fentanyl incident, he was also sentenced for charges he received in 2017 related to another crime. Those charges were trafficking in stolen property in the first degree and organized retail theft, for which Kelly sentenced Arrington to four years. The four years were counted as consecutive to the seven years Arrington had just received, so his overall sentence totaled 11 years.

As part of the plea agreement, Arrington is eligible for community supervision — more commonly known as parole. Meaning, once he has served the majority of his prison sentence, he may be released early on the promise of good behavior. In this case, that early release amounts to about 1.5 years. But if he violates any terms of parole during the time of early release, he can be sent back to prison for the remainder of the prison term.