A van rests on its side after being t-boned by a Life Line Ambulance Services vehicle in Prescott Friday, Aug. 16, 2019. (Prescott Police Department/Courtesy)

A van rolled onto its side after being t-boned by a Life Line Ambulance Services vehicle in Prescott Friday evening, Aug. 16, police said.

The Prescott Police Department (PPD) responded to the crash at the intersection of Iron Springs Road and the west entrance into the Village at the Boulders shopping center at about 5:20 p.m., according to a PPD news release.

The crash investigation revealed a Lifeline supervisor’s vehicle (an SUV) was responding to an emergency call for service with lights and siren when a 2014 Chrysler Town and Country van turned directly in front of it. 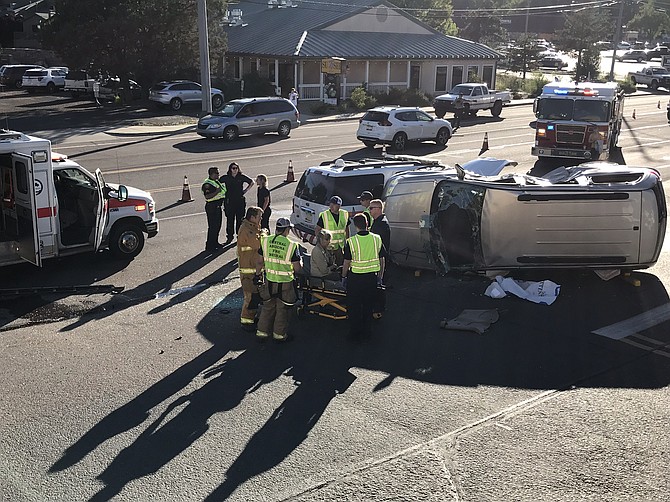 A van rests on its side after being t-boned by a Life Line Ambulance Services vehicle in Prescott Friday, Aug. 16, 2019. (Prescott Police Department/Courtesy)

Though both vehicles were heavily damaged, no injuries were reported, PPD said. The driver of the Chrysler was issued a citation for not yielding to the emergency vehicle.

“It was very fortunate that no one was injured in this traffic crash,” PPD spokesperson Jon Brambila said. “We would like to remind everyone to please watch for emergency vehicles and always make sure that you yield to emergency vehicles that are responding with lights and sirens.”

The only time drivers don’t have to stop is if the emergency vehicle is on the opposite side of the roadway and the road is divided by a concrete barrier or a median of some type.