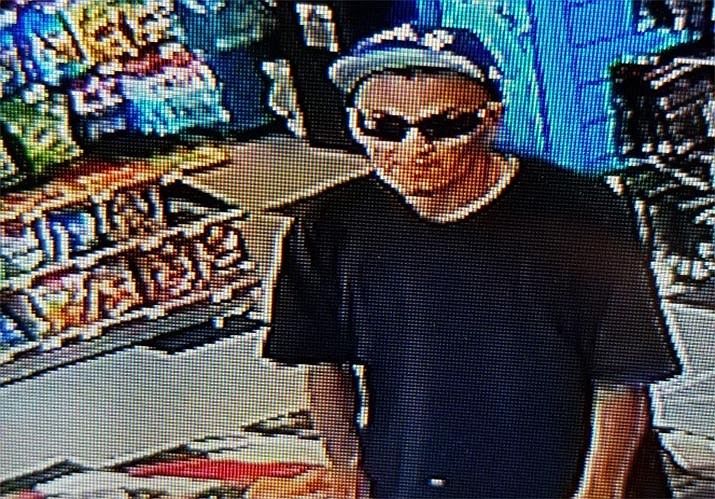 A man suspected of stealing a truck in Rimrock Sunday afternoon, Aug. 18, is being sought by the Yavapai County Sheriff’s Office (YCSO). 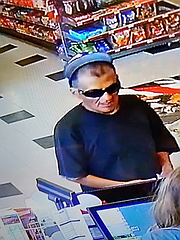 Based on video-surveillance footage taken at the scene, the suspect is described as a five-foot-ten Native American or Hispanic man weighing about 160 pounds with black hair and brown eyes. He was last wearing a black T-shirt, blue jeans and a blue hat.

Deputies began investigation the theft at about 3:45 p.m., according to a YCSO news release. They were dispatched to the McGuireville Mini Mart in the 2100 block of E. Beaver Creek Road, where the victim said he was inside the store for just a couple of minutes when his gold 2003 Toyota Tacoma half-ton pick-up was stolen.

In the surveillance video, the suspect is seen standing just outside the doorway and approaching the vehicle as soon as the victim entered the store.

Deputies gathered what information they could about the crime and then entered the vehicle license plate into a national law enforcement database, YCSO reported.

Just after 9 p.m., the reporting deputy was contacted by officers from the Gallup Police Department in New Mexico, YCSO reported. Their officers had located and stopped the stolen vehicle. After being pulled over, the suspect got out of the truck and ran from officers, who were unable to catch him.

Deputies are encouraging anyone with information on the suspect to contact YCSO at 928-771-3270 or report a tip anonymously to Yavapai Silent Witness at 1-800-932-3232. Online tips may be reported at www.yavapaisw.com. If a direct tip to Silent Witness leads to the arrest of this suspect, a cash reward will be offered.

“It goes without saying, but needs repeating – never leave the car keys in your unattended and unlocked vehicle,” YCSO spokesperson Dwight D’Evelyn said. “Be aware of your surroundings as you never know who is watching.”