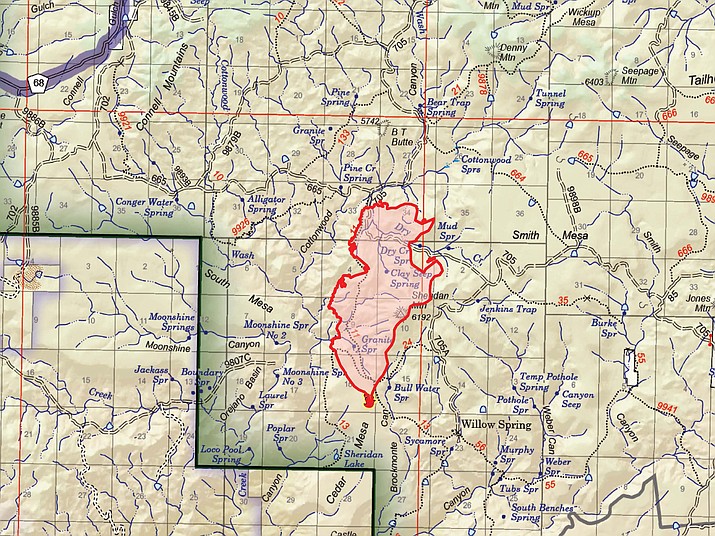 A map showing the perimeter of the Sheridan Fire, which is burning 23 miles northwest of Prescott. (PNF/Courtesy)

Due to sightings of non-authorized individuals in the closure area of the Sheridan Fire, fire officials are stressing the significance of the closure order.

“The fire area closure order that is in effect over the Sheridan Fire area is extremely important for firefighter and public safety,” according to a Prescott National Forest (PNF) news release.

Only those who are explicitly permitted by forest officials may gain access to the area, PNF said.

County Road 68, also known as Camp Wood Road, acts as the northern boundary to the closure and remains open to local traffic at this time, PNF said. Areas south of Camp Wood Road within the PNF boundary are closed. County roads on the perimeter of the closure remain open. A map and detailed description of the closure area is available on Inciweb (inciweb.nwcg.gov/incident/6522) and on the Prescott National Forest website (www.fs.usda.gov/prescott).

The fire, which began Aug. 5 via lighting strike, is located 23 miles northwest of Prescott on the Chino Valley District. Due to recent mapping from drones and infrared aircraft, the size of the fire was more accurately estimated to be about 2,380 acres as of Monday morning – it was previously thought to be about 3,700 acres. The blaze is still 0% contained, according to the release.

Approximately 80 personnel including three engines, one water tender, one hand crew, one hotshot crew and one helicopter are being used to manage the blaze. 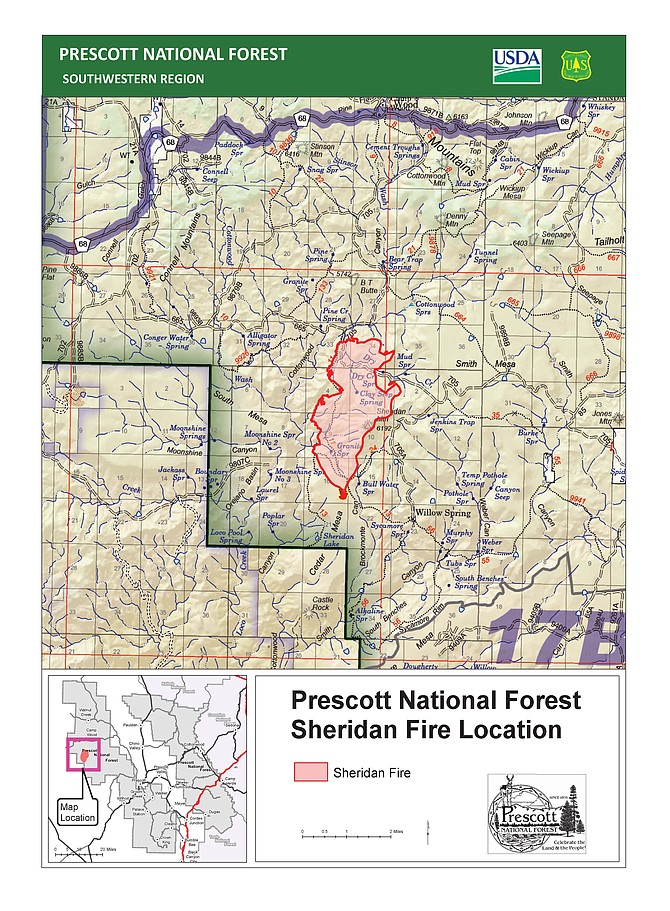 A map showing the perimeter of the Sheridan Fire, which is burning 23 miles northwest of Prescott. (PNF/Courtesy)

Authorities are asking local forest users to use caution as they continue to use the Camp Wood Road, as firefighters and multiple fire resources are working in the area.

Area roads, trails, and natural barriers will be used as control features. Masticators will begin working along the Camp Wood Road and in select areas to clear vegetation to enhance the effectiveness of control features.

Firefighters are continuing to use a helicopter and agency operated drones to monitor fire activity as access to the immediate fire area is limited mostly due to rough and rugged terrain.

Because the fire was lighting started, it is being allowed to play its natural role within the fire-adapted ecosystem. There is a wide variety of vegetation densities on the fire which, along with terrain and weather, will influence fire behavior and effects.

Smoke from the Sheridan Fire will continued to be visible from Prescott and the Tri-City area during mid-afternoon and into the evening hours, extending as far north of the general fire area relative to the predominant wind direction.

With smoke impacts continuing to be expected, forest officials recommend the public plan activities during the earlier part of the day. For those more sensitive to smoke, they recommend staying indoors with windows and doors closed and bringing pets inside.