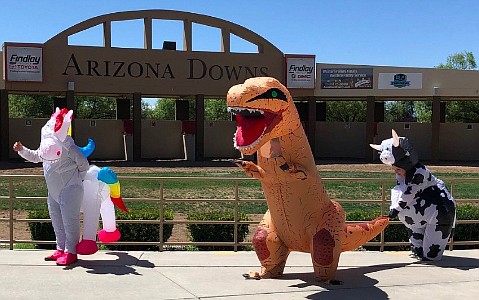 Arizona Downs will host an Inflatable Costume Race for Charity during a break in regular horseracing Saturday, Aug. 24, in Prescott Valley. (Courtesy)

Arizona Downs will host an Inflatable Costume Race for Charity during a break in regular horseracing Saturday, Aug. 24, at the racetrack, 10501 E. Highway 89A in Prescott Valley. The race takes place between the Thoroughbred and Quarter Horse races.

Twelve runners dressed in inflatable costumes such as a polar bear, unicorn or shark, will break from the starting gate and run to the finish line. Fans have an opportunity to participate in a 50/50 drawing by contributing to the charity represented by the winning runner. Half the pot will benefit the charity. A random drawing for costumes prior to race means racers won’t know which costume they are wearing.

“Inflatable costumes are always entertaining, especially when they are involved in a game of speed on a racetrack,” said Ann McGovern, Arizona Downs general manager.

In addition to live horseraces, families can visit with farm animals from Big Chino Farms and receive special prices on food and drinks all weekend, Aug. 24-25. Gates open at 10 a.m. and the first race posts at 1 p.m. Admission is $2, children 10 and younger are free.

Race for charity in a costume on Saturday, Aug. 24
Arizona Downs Back-to-School event to give away supplies to teachers
Arizona Downs reverses course, will reopen track thanks to new investor
‘Race for the Rock’ features men in dresses running for diamond
7-in-7: Music, drama, water, writing abound this week
Event Calendar