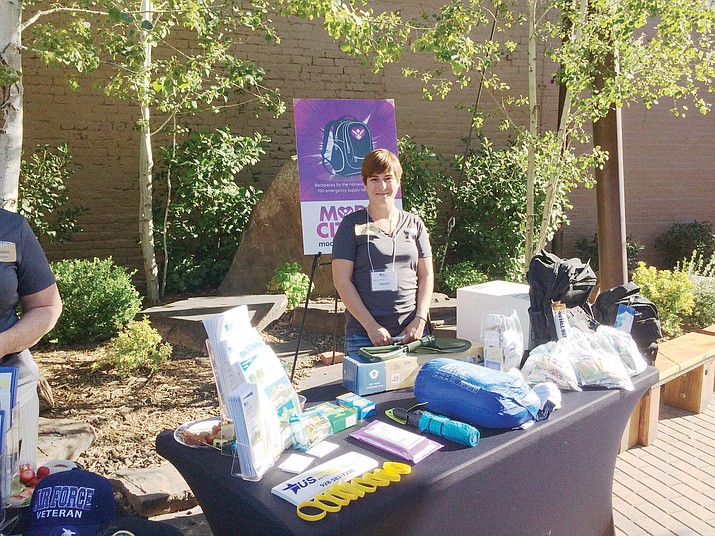 U.S. VETS Prescott homeless outreach coordinator Naomi King stands next to her booth at the donor appreciation ceremony. She offered attenders a glimpse at some of the supplies she provides to homeless veterans who opt to live off the grid, as well as resources available to assist them with everything from benefits to affordable housing options. (Nanci Hutson/Courier)

Steve Miller considers himself a man’s man, a United States Navy veteran, a father of five and grandfather of two who spent much of his career in the restaurant and banking business.

He’s not one to shed a lot of tears – except when thanking those he credits with restoring his life.

On a stage at the Holiday Courtyard in downtown Prescott on Thursday, Aug. 15, the one-time U.S. VETS Prescott client could not halt the quaver in his voice or the tears that flowed on his cheeks. Joking about being an unemotional “guy,” Miller said he can’t help but choke up when he thinks of those who went above and beyond to give him the push and help to become a homeowner again after 18 months of homelessness.

“I didn’t mean to be homeless,” Miller said of a series of events that stacked up such that he did not have the money to cover his rent payments and other expenses. “They (U.S. VETS staff) did so much for me and now I own my own place. I’m free, finally.

“So these are happy tears.”

Miller was one of the speakers at U.S. VETS Prescott’s annual donor appreciation reception.

Another supporter, Frank Shankwitz, a Prescott High graduate, veteran, retired state police homicide detective and a founder of the now-international Make-A-Wish Foundation, said he is a believer that “everyone can be a hero.”

Charity Navigator, a group that monitors how charities spend their dollars, identified that U.S. VETS Prescott invests .86 cents of every dollar it receives into its veteran clients, Shankwitz said.

“What an outstanding non-profit you have in your community,” Shankwitz declared.

U.S. VETS Prescott Executive Director Carole Benedict made it clear that their mission to end homelessness for veterans cannot be done in a vacuum. And Prescott has proved a community devoted to caring for their less fortunate veterans in meaningful ways – a new U.S. VETS headquarters on Whipple Street complete with 150 transitional housing beds, studio apartments, and specific units for medically fragile homeless veterans. The administrative offices will also be located there.

This $8 million public/private partnership between U.S. VETS Prescott and Bridgepointe Communities is expected to open in mid-January.

“It’s all about community. It’s all about connections,” Benedict said as she applauded about 100 donors and civic leaders who attended the party intended to salute their commitment to this ongoing endeavor. “We’re trying to reconnect them (homeless veterans) and all of you make that happen.”

Once homeless, Miller credits US VETS for getting life ‘back on track’
US VETS close to homes for vets
Stand Down event hailed and lamented
Gift of Survival: U.S. VETS outreach distributes backpacks to homeless veterans
U.S. Vets leader earns national agency promotion