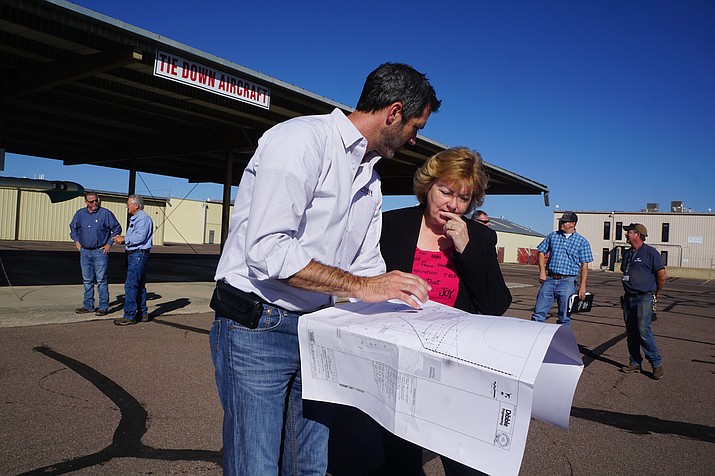 Jason Fann, left, of Fann Contracting talks with Prescott Regional Airport Director Robin Sobotta about plans for the new-terminal construction that is expected to get started this fall. A team from Fann Contracting was on hand at the airport Friday morning, Aug. 16, 2019, to work on last-minute details. (Cindy Barks/Courier)

Three structures will be coming down at the Prescott Regional Airport in the next several weeks, and the new terminal is expected to begin going up this fall.

The Prescott City Council approved a $58,400 contract on Aug. 13 for the demolition of three T-shade and T-hangar structures at the airport.

That work is occurring to make way for the new multi-million-dollar terminal and road system that has been under design for months.

Prescott Regional Airport Director Robin Sobotta spoke with a group from Fann Contracting — the construction manager for the project, along with Phoenix-based Willmeng Construction — Friday morning, Aug. 16, about last-minute details.

Jason Fann of Fann Contracting said design work has been on the fast track to get the project ready for the start of construction by late September.

“We’ve spent the last year doing design to get to this momentous occasion,” Fann said. “We’ve been on a very quick path here.”

Sobotta announced at the Aug. 13 council meeting that the official terminal groundbreaking has been set for Oct. 4, although the details, including whether the event will be open to the public, have yet to be determined.

Fann said preliminary construction work could get started as soon as Sept. 26.

Plenty of details are expected to be finalized in the meantime.

Along with the structure demolition, Sobotta said the terminal design is being wrapped up in the next few weeks. “We’re at the 95% design point,” she said this past week.

The next major milestone will be the determination of the “guaranteed maximum price” from the construction-manager-at-risk (CMAR) contractor.

The CMAR process differs from the traditional design-bid-build process in that it allows the chosen construction contractor to get involved early in the design phase.

The CMAR process also requires a guaranteed maximum price that would not change throughout the construction phase.

Sobotta said the CMAR process has allowed for phasing aspects that have trimmed about two months from the schedule. “It feels like a truly collaborative process,” she said.

Currently, the project is working with an estimated cost of $16 million for the new terminal and road system, Sobotta said.

The actual guaranteed price is expected in early September, after the Willmeng/Fann team gets the bids for the more than 50 separate sub-contractors and suppliers that are being sought.

Once the CMAR determines the guaranteed maximum price, Sobotta said, the city expects to hear from the Federal Aviation Administration (FAA) about the amount of the federal grant award for the terminal.

Although the city has yet to hear how much of the total cost the FAA will cover, the federal agency reportedly has been encouraging throughout the process. “They’ve said to continue,” Sobotta said of the FAA feedback to date.

Sobotta said she expects to hear from the FAA before Sept. 24, when the terminal project is scheduled to go to the Prescott City Council for final approval.

Already, the city has a commitment of $1 million from the state to go toward the cost of the terminal, and the City Council has allocated $3.5 million of local money as well.

On Aug. 13, council members approved a $58,400 contract with Ironwood Contractors, Inc., (doing business as Catclaw Contractors), for the demolition of a row of 10 aircraft T-shades, a row of 10 T-hangars, and a box hangar.

Sobotta said the general-aviation tenants of the T-hangars and T-shades were offered accommodation to replace the spaces that are being demolished. Other spaces were available through turnover, she said, and some of the tenants chose to move there.

In addition, Sobotta said she plans to take a plan for more T-hangars to the City Council in the next fiscal-year budget cycle. If approved by the council, those structures could get underway in 2021.

The start of the terminal construction would culminate several decades of city discussion about the need for a new airport terminal to replace the existing 1940s-era terminal.