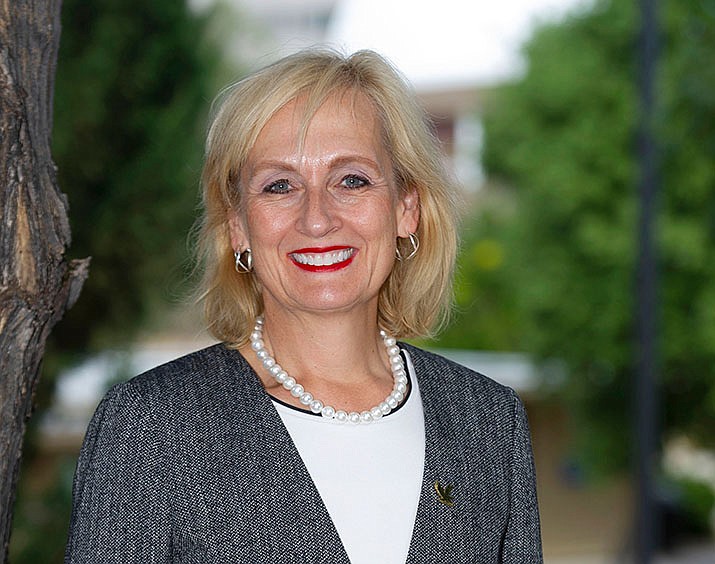 She has a 15-year-old rescue cat named Molly; her husband’s name is Dr. Rick Lahman, department chairman for material science at Rutgers University in New Jersey.

She is a fan of Jane Austen novels. Her three favorites: “Pride and Prejudice,” “Sense and Sensibility,” and “Emma.”

Of course, there is much more to know about the first woman selected to head up the ERAU Prescott campus in its four-decade history.

The mechanical engineer/researcher/educator with a gracious, welcoming demeanor, one infused with a sense of humor, is ready for faculty/students and community folks to ask.

In her first two weeks, Karlsson who comes to the university from a six-year post as professor and dean of the Washkewicz College of Engineering at Cleveland State University, is spending much of her time getting to know students so they see her as more than an administrative figurehead.

“I’m afraid with this job to get too far away from students. I want to get to know them,” said Karlsson, who earned her bachelor’s and master’s degrees in engineering at Linkoping University in Sweden and a doctorate in mechanical engineering/applied mechanics at Rutgers University. She did her postdoctoral research at Princeton University.

Karlsson, likewise, intends to make herself known to the greater community. She said she values the university’s longstanding civic partnerships.

“I don’t want to be an exclusive campus overgrown by ivy,” she emphasized.

Karlsson’s selection to succeed Frank Ayers, a retired United States Air Force colonel, pilot and flight instructor, is rooted in a blend between her expertise in the engineering field and ability to connect with students, according to ERAU leaders.

“We liked that she prioritized engaging students, in lectures and in labs,” said Dr. Barry Butler, Embry-Riddle president. “Like so many of our leaders, she has front-line industry experience as well as stellar scholarly achievements. We take our commitment to industry seriously, so that combination made Dr. Karlsson stand out in a large pool of exceptionally qualified candidates.

Prior to entering academia as a professor/research leader and graduate student advisor, Karlsson worked as a researcher and designer for Saab Missiles and Saab Aerospace. She was a technical advisor in material science for Sweden’s embassy in the United States.

A lover of the outdoors, Karlsson said she knew little about Prescott before applying for the position but is now finding it to be a place that offers lots of ways to decompress after a demanding work day. She hopes to eventually hike the more than 50-mile Prescott Circle Trail.

“Her enthusiasm about joining the Prescott community was also important to us,” Butler said.

Karlsson admits she did not envision a career in higher education.

In high school, Karlsson said she excelled in both mathematics and physics. Engineering appeared to be her path — one she embraced as a college student and as a young adult making her mark in the world.

In pursuing her doctorate, with research her focus, Karlsson said she underestimated the impact of working with inquisitive student minds.

“Once I was in the classroom with students, I experienced an amazing transformation as I watched students grow,” Karlsson said.

She found then that she has a “passion” for “developing young minds.”

In her short tenure at Embry-Riddle, Karlsson said she has come to see the university needs to get better about telling its story.

No more is Embry-Riddle a university strictly for aviators, or those entering the aviation industry.

Embry-Riddle attracts “remarkable” students and faculty, Karlsson said of the university that this year enrolled some 3,000 students. She said she wants to do a better job introducing those people to the local, national and international community. Embry-Riddle prides itself on diversity, and Karlsson wants to build on that tradition, she said.

“We provide a really, strong relevant education, and I want to build on that for the future,” Karlsson said. “We don’t just want them to graduate. We want to put them into a real career.”

And she is committed to spreading that message far and wide.

“We want families to come, bring their kids so they see that college is not scary, but something to dream about,” Karlsson said. “Obviously, we would love to have (our community) kids come here, but we really want to inspire kids to pursue a college education.”

On a personal note, Karlsson is clear with this post she has found her niche.

“To be in education is such an honor,” she concluded.