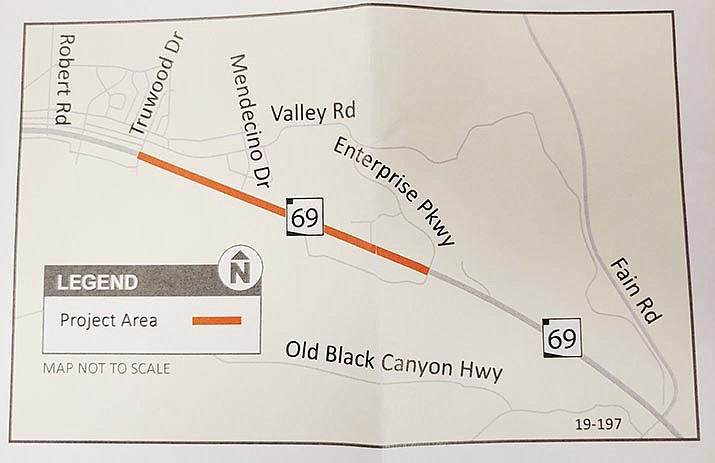 To improve safety, Arizona Department of Transportation (ADOT) officials are considering whether to install a raised median, a traffic signal and a future green-T intersection along a 2-mile stretch of Highway 69, from Truwood Drive to Enterprise Parkway in Prescott Valley.

Afterward, some participants filled out comment cards, which an ADOT project team will review during its comment period for the project. The Arizona State Transportation Board will get the final say for approval with a vote during one of its upcoming regular board meetings.

ADOT officials said construction along the corridor is tentatively scheduled to begin this fall.

Steinberger said a five-year ADOT traffic study reported an average of 25,000 to 30,000 vehicles per day traveling along the 2-mile stretch. The study recorded 64 crashes, including 32 serious crashes and two fatalities, during those five years.

He added that if ADOT installed an 8-foot-wide raised median with curbing and landscaping from Navajo Drive to Enterprise Parkway, it could result in a 25% to 40% reduction in accidents while calming traffic.

The proposed traffic light would be installed at Highway 69 and Mendecino Drive, located nearly halfway between Truwood and Enterprise.

Stepping Stones Agencies opened its new thrift store location on Mendecino this past week, and the nonprofit has been working with the Town of Prescott Valley and ADOT to get the signal. At first, only a conduit for the signal would be installed.

The green-T intersection at Truwood would feature a left turn for a future signal, ADOT reported in its presentation.

This project would receive funding from the Highway Safety Improvement Program (HSIP), a federal agency that distributes money to states for these purposes. The state transportation board will eventually announce the final construction cost, although ADOT estimates it will be $1.6 million.

For more information about the Truwood-Enterprise highway improvement project, call the ADOT Bilingual Project Information Line at 855-712-8530 or visit azdot.gov/contact and select “Projects” from the drop-down menu. To receive project updates via email, visit azdot.gov/sr69truwoodfain.