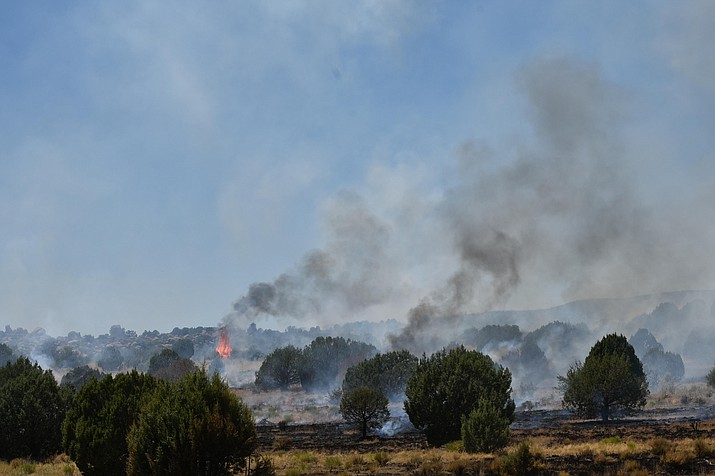 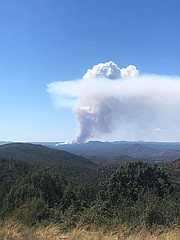 Billowing smoke was highly visible in the tri-city area Thursday, Aug. 15, as firefighters conducted aerial ignitions on the Sheridan Fire throughout the day.

Due to these ignitions, the lighting-started fire located 23 miles northwest of Prescott grew from about 15 acres to 674 acres in a 24-hour period, according to the Prescott National Forest (PNF).

Since the fire is burning in a remote area, fire managers are allowing it to naturally consume the buildup of forest fuels in the area. This not only reduces the risk of catastrophic wildfire that could damage private property and recreational sites, but also contributes to a healthier forest, PNF spokesperson Cheyenne Warner said in a news release.

“Nutrients are created by the recycling of burned material which enriches soils and stimulates growth,” Warner said. “New grasses, shrubs, and trees replenish and grow stronger. Wildlife habitats are created and an increase in forage becomes available.”

Fire managers planned in advance of the ignitions so as to safely protect values at risk consisting of range improvements, recreation sites, private property, protected species, and archeological and historical heritage sites near the burn area, Warner said.

The public may continue to see smoke as firefighters will continue to scout the area for roads, trails, and natural barriers to use as control lines, she said.

Temporary Flight Restrictions (TFR) continue to be in place over the Sheridan and Pemberton fires to provide a safe environment for firefighting aircraft being used for aerial operations.

There was little active fire behavior on the Pemberton Fire Thursday with just some isolated flaming of juniper trees and brush, Warner said.

“There will be no more ignitions applied to the fire and remaining crews will continue to patrol and monitor along established control lines,” she said.

The fire, which started on Aug. 6 about 13 miles northwest of Prescott, has reached 1,173 acres, but isn’t expected to spread much further, PNF reported.

There may continue to be some smoke from the fire for several days as fire in the interior encounters unburned fuel, but smoke should generally dissipate quickly, she said.

Due to smoke impacts and the continued presence of firefighters and equipment, drivers are being asked to use caution along roadways.