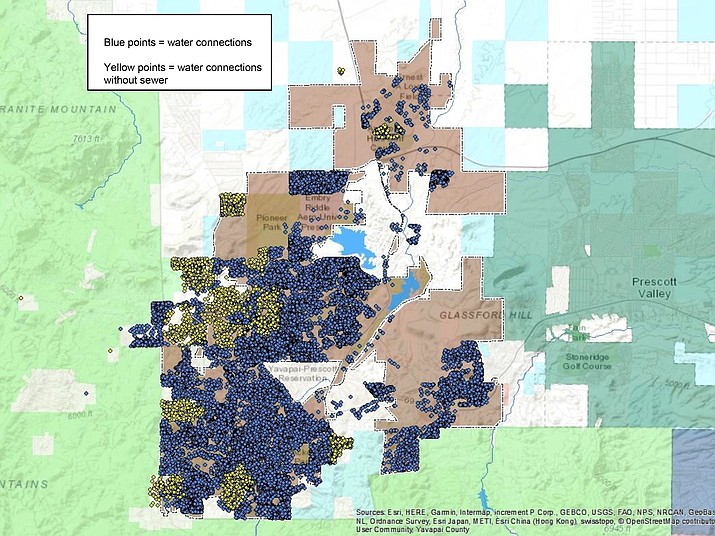 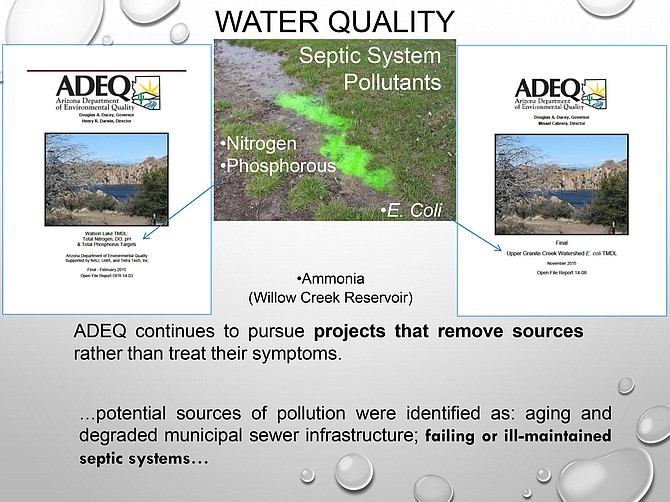 City officials say the septic systems are known to create the type of pollutants that have caused Watson Lake and Granite Creek and other area waterways to be listed as “impaired” for years.

Now, a change is under review that aims to reduce the number of septic systems within city limits.

As a part of its review of proposed water-policy changes, the Prescott City Council is looking into requiring all new construction within city limits to hook up to the city sewer system.

In addition, the proposed changes would require all existing construction to connect “when the infrastructure is available for that property.”

The Aug. 13 study session discussion was the latest in a series of presentations to the City Council on possible sweeping changes in the city’s water policy.

Another discussion will take place on Aug. 27 to review the proposed code and policy changes, and a possible vote on adoption is set for Sept. 10.

For more than a decade, Prescott’s waterways have been determined to be impaired by E. coli and other pollutants. Years of studies have gone into finding ways to reduce the pollutants.

Matt Killeen, the city’s environmental specialist, told the council that the Arizona Department of Environmental Quality (ADEQ) “is looking for steps that would remove those pollutants.”

While studies have yet to show exactly how much of the pollution comes from area septic systems, Killeen said the neighborhoods that are served largely by septic systems are considered to be “hot spots” for pollution.

“Septic systems are known to produce these nutrients,” Killeen said of the pollutants present in 14 impaired water bodies in the area, including Watson Lake, as well as Granite, Miller, Butte, and Manzanita creeks.

Along with information about the benefits of the changes, the council heard from several local residents who said the changes would be a financial hardship for homeowners.

Area resident Jack Howerton told the council he was looking into buying a parcel along Gurley Street to build a home. But, he said, he has been unable to proceed because of the pending policy changes.

Local Realtor Gerry Garcia explained that the estimated $75,000 cost of connecting the parcel to the nearest sewer line would make building on the lot unrealistic for Howerton.

Garcia said a number of Prescott’s vacant parcels would be in similar situations under the proposed requirements. “(The policy changes) would render them worthless,” she said.

The council also heard from local resident Gordon Bond, who said he had spoken with a friend who was worried that the new policy would require him to connect his home, currently served by a septic system, into the sewer system at a cost of about $15,000.

Bond said such an expense would be cost-prohibitive for many of the area’s retirees on fixed incomes.

Prescott Public Works Director Craig Dotseth told the council that about 3,850 lots with an existing building are not connected to sewer.

“There is currently no requirement to connect to sewer in city code,” the city presentation stated, adding, “Many properties still develop with septic systems.”

In addition to the benefits to the water quality in the creeks and lakes, the city maintains that the change also would result in more wastewater being treated and recharged into the aquifer.

SHOULD THE CITY PAY?

It was that point that several local residents emphasized Tuesday in their assertions that the city should take on the cost of hooking the septic systems into the sewer.

Local water advocate Leslie Hoy maintained that the proposed changes are being “driven by the negotiations with Arizona Eco (the developer looking to build a project in the Granite Dells).”

As a part of its water portfolio, the city currently recharges treated wastewater (effluent) into the aquifer and receives water credits from the state for the recharged water. In turn, the city can allocate those water credits to new development.

With that in mind, Hoy said the city should pay the cost of getting the septic systems hooked into the sewer system.

City Manager Michael Lamar maintained, however, that the city already has the water available to serve the new development without the additional recharged water. The policy change is being proposed for the benefit of the aquifer, he said.

And, pointing to the city’s $69 million public-safety pension debt, which was discussed earlier Tuesday, Mayor Greg Mengarelli added, “We have some priorities in terms of spending.”

Lamar suggested a future discussion on whether and how much the city might contribute, based on factors such as the age of the septic systems and whether they are failing.