Preview: Cougars on the prowl for first winning season since 2010
Prep Football 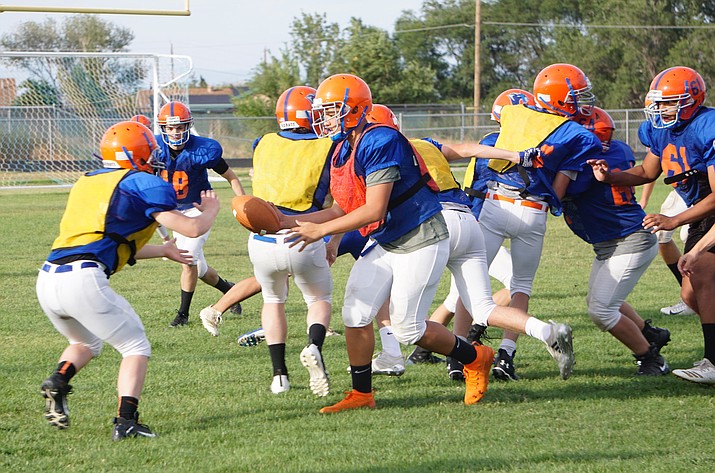 CHINO VALLEY — The high school football season is nearly underway and the Chino Valley Cougars are primed and ready to rise above this level of mediocrity they’ve wallowed in for just about a decade.

Having not mustered a winning a season since 2010 when they finished 5-4 overall, the Cougars, led by six-year head coach Wade Krug, are hungrier than ever to make an impressive run for the 3A West Region title. In Krug’s tenure, the Cougars have consistently finished toward the bottom of region standings and have yet to make the playoffs.

Last season, the Cougars struggled in region action, going 1-4 (4-6 overall) to place fifth in the 3A West standings while perennial region powerhouse Northwest Christian ran away with the title. However, Krug said the team is due for a breakout season and is confident this year’s squad is more than capable of doing so.

“The team’s looking really good right now. We have a really good group of kids,” Krug said. “We got 26 good quality varsity players. We got a lot of good kids that have come out, some returners and some new kids, that are willing to cross the line and play football before they go into their other sports like wrestling, basketball and baseball.”

Unfortunately for Chino Valley, the team’s offense already took a big hit after stalwart quarterback Michael Paulus graduated and committed to Dakota State in the spring. Krug understands it’s extremely difficult to fill the void that was left behind by a rare talent like Paulus, but he plans to do so by using a collective effort from the Cougars rather than just with one player.

“You can’t replace a Michael Paulus. You just got to find a way of replacing his production,” Krug said. “You don’t have one player, you might have just two or three players that replace his production and that’s what we’ve been able to do. We got a lot of good athletes that have come this year and it’s just going to be player by committee until we find that right recipe to go out there and compete every day.”

Despite Krug’s multiplayer plan to replace the production of Paulus, he will mainly look to sophomore Jayden Smith to take up the lion’s share of quarterback minutes. Smith didn’t get to see much playing time last year as a freshman but Krug said he expects him to make a significant leap this season.

Tyler Carey could also see some time at QB as the current senior did play behind Paulus last season, but made an appearance in all 10 games while recording 12 yards per completion, 528 total yards and seven touchdowns.

Deemed by Krug as one of the most intelligent players on the field, all-conference junior center Rudy Melendez will also be returning for the Cougars along with senior Trevor Gianfrancesco. The 5-foot-11, 175-pound Gianfrancesco is set to have a big year, anchoring Chino Valley’s defense as a middle linebacker and will also see some repetitions at running back, according to Krug.

“I love leading my teammates out on the field on Friday nights. I’m that dude that’s going to stop them in the hole, get that extra yard, whatever coach needs,” Gianfrancesco said, who tallied 93 total yards and three touchdowns last season. “But as a team, we’re versatile everywhere. Our passing, our running game and our defense are all very scary.”

All-conference second-team wide receivers Dante DeBono (Jr.) and J.R. Willingham (Sr.) are expected to be huge weapons that will make the Cougars’ passing game all the more lethal. TE Dakota Mcmains will also lend a big helping hand as a reliable option when everyone else is covered.

“It feels really good to be back out here. We’re looking pretty good and we have pretty good depth this year so I’m excited about that of having some guys out here to fill the shoes,” Willingham said.

This years schedule will feature an 11th game this year due to the fact that Parker did not have enough opponents to complete a 10-game schedule. Chino Valley was one of the teams that picked up a match-up with Parker to help them complete a full slate of 10 games, which also means the Cougars will not have a bye week.

Chino Valley will open up the season at home against Parker on Aug. 23 and will get thrown into the fire the following week when they take on perennial 3A Conference powerhouse Valley Christian. Valley Christian reached the state semifinals last season and lost to eventual champions and 3A West members Northwest Christian.

Speaking of Northwest Christian, the Cougars will close out the regular season against the Crusaders on the road Nov. 1. 3A West Region action will kick off on Oct. 4 with a road game against Kingman Academy.

“We’re going to have a good season. We have a couple games marked on the calendar … But we think we can go out and compete with just about anyone else that we face this year,” Krug said. “We do have a little bit of a chip on our shoulder. Chino Valley doesn’t have a lot of respect when it comes to football. We’ve kind of been in the bottom of what we’ve done, but we’re slowly growing this program, slowly growing the respect for this program. So hopefully, this is going to be the year that we break out and have a really good season.”