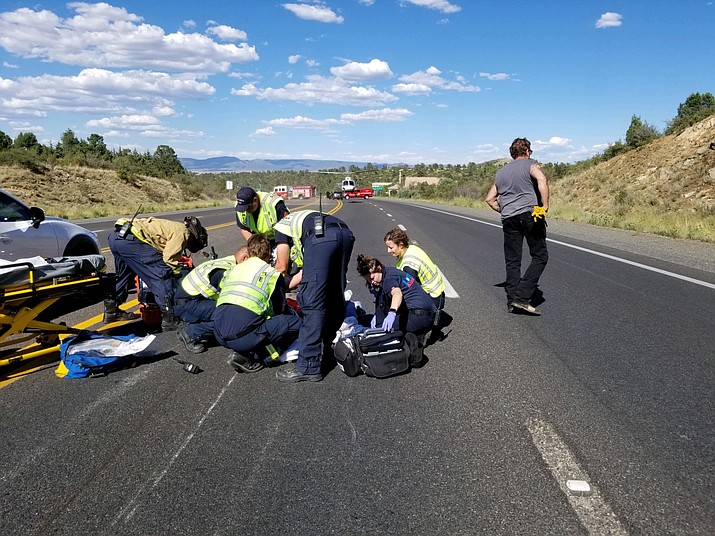 EDITOR'S NOTE: This is an updated version of an earlier story. For the original version, click here.

A man in his 70s was transported via helicopter to a level one trauma center near Phoenix after his motorcycle crashed on Highway 69 at Sunrise Blvd in Prescott around 3:30 p.m. Thursday, Aug. 15, according to officials.

The man was not wearing a helmet and had received multi-system trauma to his body and head, Prescott Fire Department Paramedic Engineer Conrad Jackson said in a news release. No other vehicles were damaged in the crash and no one else was injured.

The Highway was temporarily closed in both directions starting at about 4 p.m. while the man was being treated at the scene and remained closed until the helicopter was able to land nearby and take off with the patient. The rider was taken to HonorHealth Deer Valley hospital, Jackson said.

“When traffic was reopened, a significant amount of rubber-necking occurred as people viewed the accident scene,” Jackson said.

He said one driver even almost caused another accident by attempting to film the crash scene with her phone as she drove by.

“This was in violation of the hands-free phone use law and was negatively impacting traffic flow,” Jackson said. “Prescott Fire asks that drivers please focus on driving and maintaining control of their vehicle to help avoid secondary accidents.”