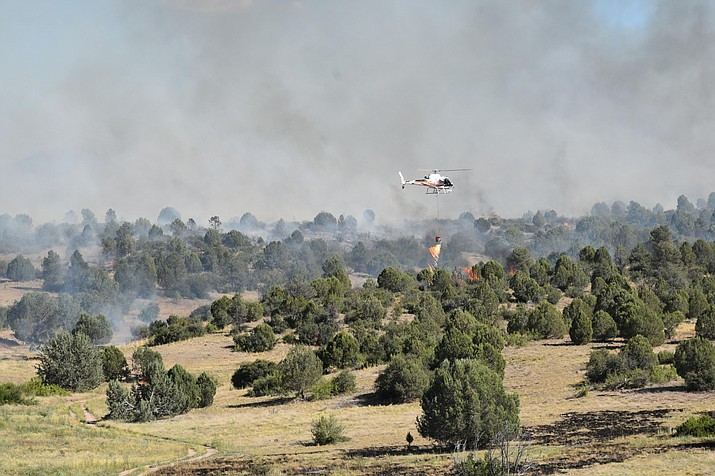 Wildland firefighters with the Prescott National Forest are beginning to shift some of their focus from the Pemberton Fire to the Sheridan Fire, both of which are burning on the Chino Valley Ranger District northwest of Prescott.

Firefighters were successful in spreading the Pemberton Fire Wednesday, Aug. 14, using hand and aerial ignitions. This was done to support the lighting-started fire in fulfilling its natural role of reducing dense forest fuels (trees, brush, grass, etc.), according to the Prescott National Forest (PNF). It’s size as of midday Thursday was 1,173 acres with zero-percent containment. 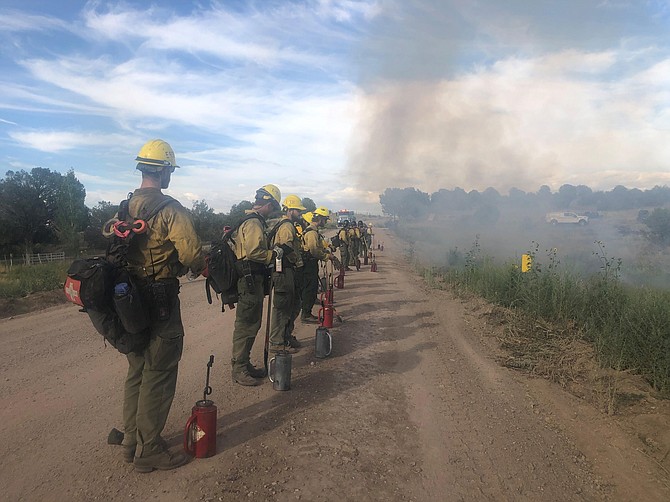 Wildland firefighters position along the perimeter of the Pemberton Fire with flame torches at the ready for firing operations Wednesday, Aug. 14. (Prescott National Forest/Courtesy)

Smoke from the fire can still be expected to be visible as interior portions of the blaze continue to consume fuels from previous day’s ignitions. Crews spent Thursday monitoring and patrolling the fire along established control lines.

The lightning-caused Sheridan Fire, located about 25 miles northwest of Prescott, is burning near Sheridan Mountain on Cedar Mesa.

The fire, which was spotted on Aug. 5, has consumed about 15 acres of short grass and brush, PNF reported Thursday.

Firefighters began to conduct aerial ignitions on the slow-burning fire Thursday and plan to continue doing so as long as conditions are favorable, PNF said. Being that the fire is in a remote area, firefighters are also scouting out the area for roads, trails and natural barriers to use as control lines.

Temporary Flight Restrictions (TFR) continue to be in place over the Pemberton and Sheridan fires to provide a safe environment for firefighting aircraft being used for aerial operations.