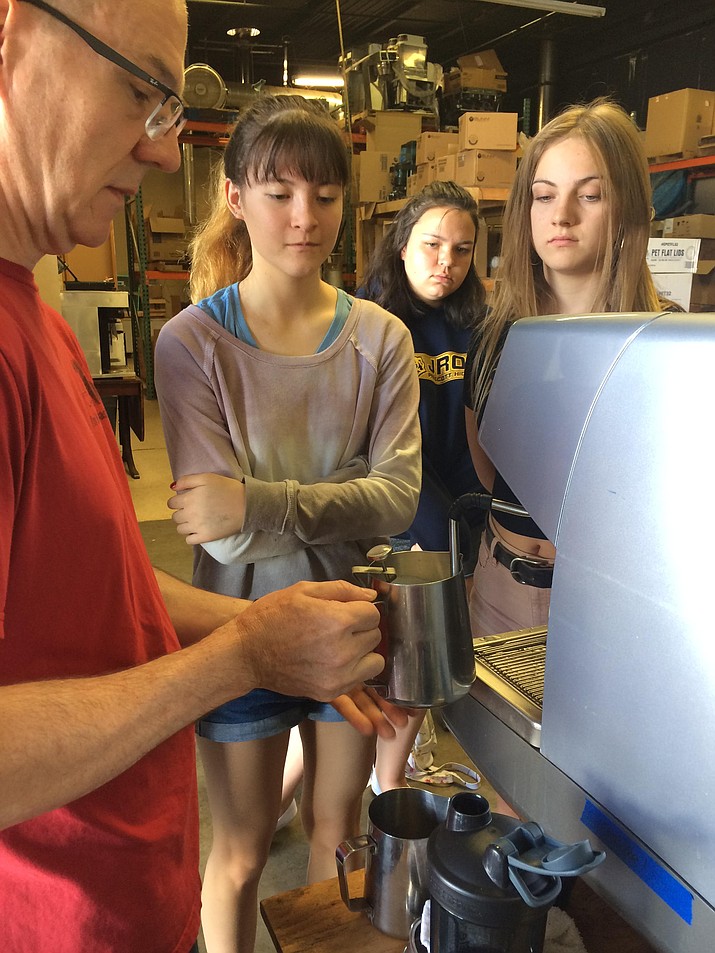 On a Sunday morning, ten local teenagers were taking turns sipping fancy teas, such as magnolia oolong tea, or tasting brands of rich coffee, including a vanilla latte.

They weren’t trying out the latest coffee hangout, or just seeking a caffeine rush.

These teens attended a weekend program offered through Corvis Distributing in Prescott Valley because they are eager to learn skills that might one day soon enable them to be hired as baristas.

With a $10,500 grant from the United Way, the Launch Pad Teen Center partnered with Corvis for the workshop titled “Coffee Like It’s Hot!” that introduced the teens to raw tea and coffee products. The 9 a.m. to noon workshops also taught the teens how to properly operate a commercial espresso machine as well as how to steep raw tea leaves into a drink that will appeal to a particular customer’s taste.

In this workshop, students were introduced to raw coffee beans and teas that are then ground, or infused, to make drinks as would be done in a professional coffee/tea shop.

The Launch Pad is preparing to renovate a downtown warehouse into a new facility that will offer a wide variety of programs and opportunities for teens, including job apprenticeships at its own coffee shop tentatively named the “Over the Moon Café.”

Center Founder and Executive Director Courtney Osterfelt said job skills and apprenticeship opportunities are something many of their younger teens inquire about because they want to be prepared for when they are old enough to get a meaningful job. Often, the teens complain that they have no ability to garner some of the experience and job skills desire to land even an after school position. So the Launch Pad intends to step in and offer meaningful apprenticeships to eager teens.

Osterfelt said she was impressed with the response – the workshop was capped at ten – and so will offer a similar workshop in the future to accommodate another group who could not participate in this one.

The intent behind this workshop was to offer the teens a chance to hear from industry professionals about what is required to run a successful business, and in particular a coffee spot such as what they hope to offer in their new center.

Osterfelt said her hope is that through such workshops and training opportunities these teens prove to be better employment prospects. The very fact these teens were willing to give up several hours of their weekend to attend such a workshop speaks volumes to their motivation to be good employees, she said.

“They want to work,” Osterfelt said.

Tri-City Prep sophomore Sedona Ortega said she saw this as a great opportunity to learn something about a business suitable to teen employment. This way, she said, she has something to offer an employer when she applies for a position.

At the very least, Ortega and the other teens know the basics of how to properly operate and clean the machinery to make tea and coffee; and they can speak proficiently about different roasts and tea blends. Each teen was given sheets of information on how to prepare various espresso drinks and infused teas.

Corvis Owner Mandy Moreau offered lessons in the various varieties of tea – she informed them about caffeine content, flavors and proper preparation minus a tea bag – as Prescott Coffee Roasters Owner Rich Gregory taught students about how to grind beans and properly steam milk.

Moreau said she appreciated the chance to offer such a mini-training that is able to be added to a teens’ employment resume.

Her hope was that they might learn enough to make them “more comfortable applying for a barista job.”

“I think they’ve been very interested,” Moreau said of the students’ inquiries and attention.

One of the things Sedona appreciated beyond learning the intricacies of making tea and coffee from authentic product rather than from off a grocery shelf was the need to offer high quality customer service.

Successful baristas are people able to cater to the wishes of their customers, their instructors said. Coffee is no longer just a cup of joe; it can be a complicated blend of espresso, steamed milk, flavors, even presentation, they explained.

“And customer service is important for lots of different things,” Sedona concluded.

“I’ve really learned a lot. I found it to be very helpful,” said Prescott High freshman Sage Johnson who was in the coffee lesson that highlighted details such as steam and roasting temperatures and even some of the tedious aspects of equipment maintenance.

“I now know how to make proper coffee and tea,” Sage concluded.